Our friends Jennifer and Steven visited us in late November 2019 to partake in the final Formula 1 race of the season. They were traveling to the UK from Canada and squeezed in a short trip to Abu Dhabi in the middle. They arrived on the evening of Wednesday, November 27th and we were there to pick them up at the airport. Dan had the top off his Jeep so Steven hopped in with him and Jen joined me in the Infiniti. We met back at the apartment for some drinks and a meat/cheese platter before finally hitting the hay.

The next day the F1 activities began. Jen and Steven had a lazy morning, then lunch at Catch, before Dan picked them up after work to head to the Pit Lane Walk open to the public until 3:30 pm. I left work early to try and join them but with parking and the slow bus I missed the pit lane walk by precisely one minute. But don’t worry, I met them at the beer garden after their walk. We then made our way back to Yas Mall where we had parked the cars and did a little last-minute shopping. The Black Friday sale had started and Dan and I needed new outfits for our 40th Birthday Brunch Party on Friday. Dan got a stellar new jacket and Jen helped me picked out a new outfit. We soon arrived back at the apartment for a home cooked dinner of moussaka and rocket salad. I believe this is when the puzzling first began… Dan had bought me a 2000 piece Christmas puzzle a couple of years back which Dan and I had started on before our guests had arrived. We all started picking away at it piece by piece. We stayed up again till at least 1:00 am catching up over puzzling. Did I mention the previous weekend we had gone full throttle on the Christmas decorating in the apartment? It was full on Christmas spirit in there! 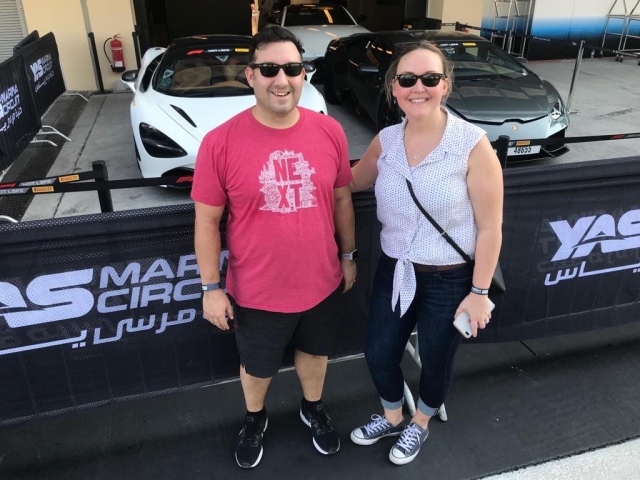 Steven and Jen on Pit Lane

The next day was also F1 but we had planned to skip this day as Jen and Steven wanted to do a brunch. Dan and I hadn’t yet celebrated our recent 40th birthday’s together so we had arranged a brunch for eight at The Market Brunch at Saadiyat Rotana Resort & Villas. Our friends Jen, Spence, Amanda, and Laurie joined us for a combined birthday celebration. We were seated out in the garden and the weather couldn’t have been more perfect. For those of you who have not experienced a Friday Brunch in the UAE it is a momentous occasion. It is all inclusive food and beverages and most of us went for the premium package which included caviar, oysters, and champagne, along with some other premium beverages. We enjoyed the weather and double downed on the grilled lobster. Everyone hopped in their respective taxi’s home after one last post brunch beverage and when we got back we couldn’t resist puzzling some more. 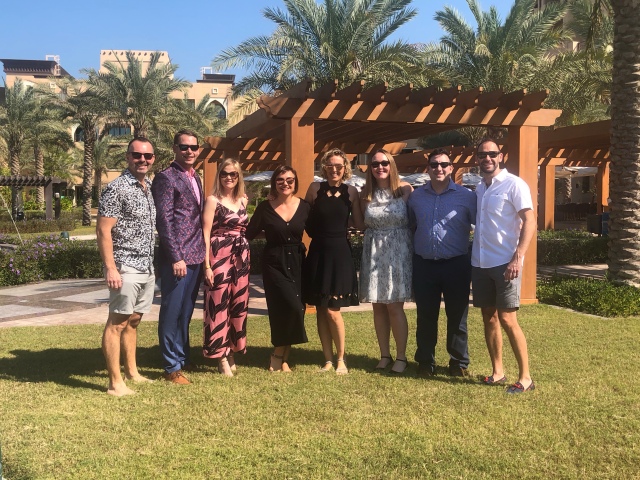 On Saturday, we had a nice breakfast and then headed up to Yas Island to spend the day at the F1 track. Steven had a friend working there who was able to hook us up with VIP passes – this meant I got to check out the pit lane after all, but VIP style. We hung out on Pit Lane and then walked along the Yas Marina, where the huge yachts and party boats are moored. Dan and I had been to F1 before but we had never experienced the pit lane or marina access so this was an eye-opening experience for us. It was only 8:00 pm by this point but it was pretty lively – we could only imagine what it would be like at 2:00 am. We then got on the shuttle bus and slowly made it to the du Arena for the first F1 concert we were planning to attend – Lana Del Rey. We decided not to attend Marshmellow and Gucci Mane the previous two nights. We left a bit early, drove back to Abu Dhabi Island, and did a bit more puzzling before getting some zzz’s. 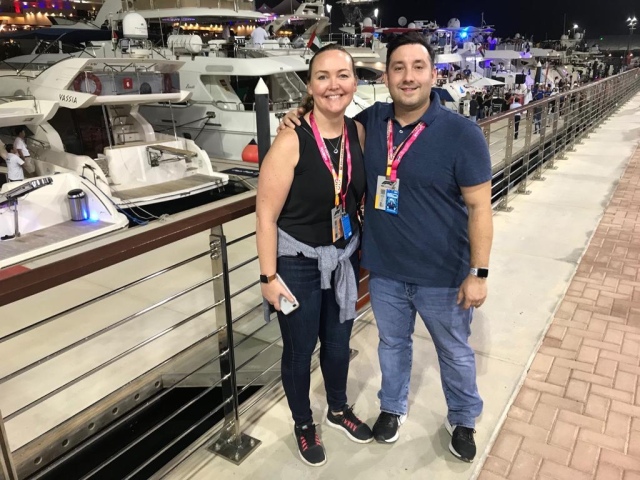 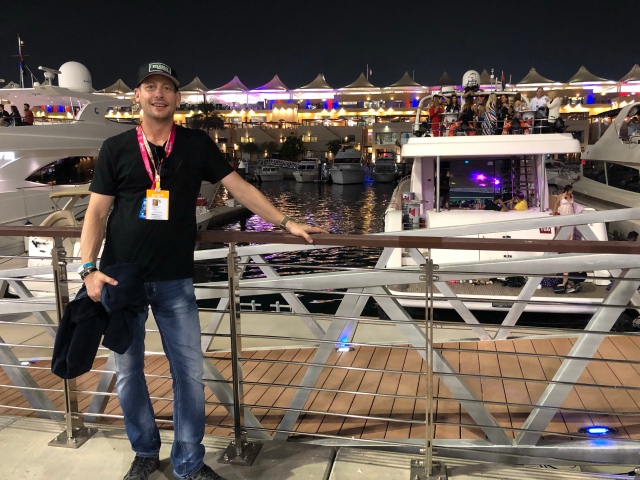 Checking out the Marina

Sunday was the Big Day – the final race of the F1 season. We were back up at the grounds that afternoon and hit the VIP pit lane once again. This time the drivers were doing a parade drive around the track and we got to see them once they returned from the drive. We managed to get back to the north grandstand, waited in line for a beer, and then the Etihad A380 and Dreamliner flyby went past overhead before the race started. Hamilton did win the race as expected (he had already clinched the championship anyways) but it was still a fun race and atmosphere. We then wandered over to the du Arena and grabbed some dinner from the food trucks before The Killers got on stage for the final after-race concert. We stayed for the encore and then made it home for one last night cap (and a few more puzzle pieces). We dropped Jen and Steven the next morning at the airport for their flight back to London where they were connecting onwards to Edinburgh for a few days before heading back to Canada. It was great having them visit and take in the F1 race with us! 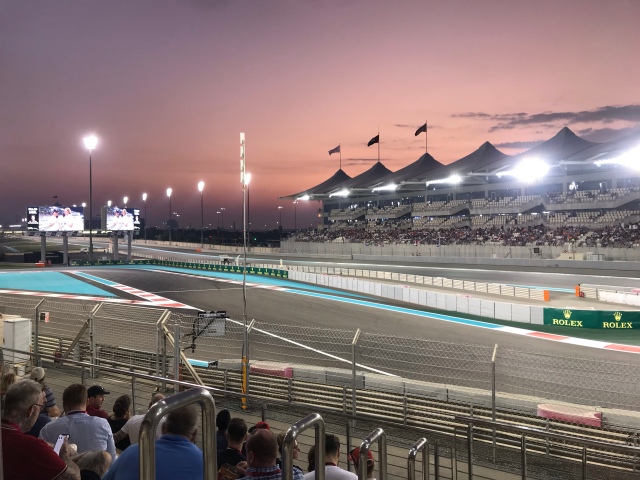 In September 2010, Dan and I received working visas for the United Kingdom. We sold our condo, quit our jobs and packed our bags to move to London. This blog is designed to update our friends and family back home about where we are and what we are up to, as well as to share our adventure with others.
View all posts by rrettenmier →
This entry was posted in The Middle East, United Arab Emirates and tagged AbuDhabiGP, Drivers' track parade, du Arena, F1, Formula 1, Formula 1 Abu Dhabi, Formula 1 Abu Dhabi Grand Prix, Friday Brunch, Pit Lane Walk, Saadiyat Island, Saadiyat Rotana, The Killers, The Market Brunch, Yas Island, Yas Marina, Yas Marina Circuit. Bookmark the permalink.