Posted on November 27, 2018 by danroyerickson

Mom and I caught the 11:10am to Brussels and then the 12:17pm to Lille, France.  It was worth taking the train to Lille and renting a car as opposed to renting from Bruges and paying the cross-country drop off fee.  We loaded up the rental car who mom had just christened with the name Toulouse.  We went south on the A1 then cut west towards Amiens.  We hit the coast just south of Dieppe and continued with our drive.  We stretched our legs at the Palais Bénédictine in Fécamp.  In Étretat, we stopped and walked into the town known for its striking white cliffs.  With a road coffee in hand, we made the final stretch south crossing the Normandy Bridge over the Seine and arrived at our final destination of Honfleur.  Honfleur was an important historical port and has attracted many famous artists.  We found our B&B, A l’ecole buissonniere, and walked down to the port in search of a meal.  I got my oyster fix followed by Coquille St Jacques accompanied with some cider.  Interestingly, the scallops had the bright orange roe still attached…a first for me.  Mom opted for the seafood stew.  We strolled around the port, but there was a cold wind blowing, so we headed back to the hotel for the night. 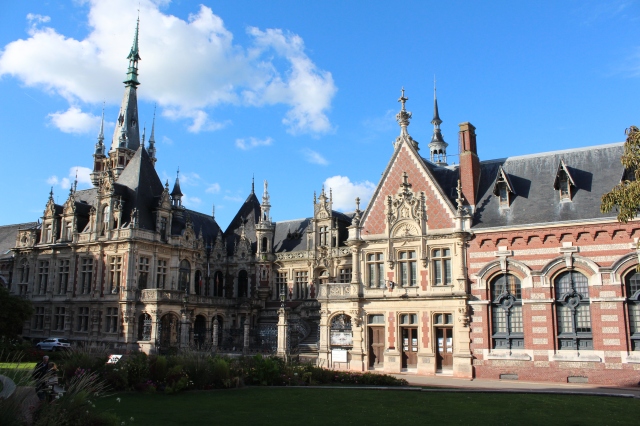 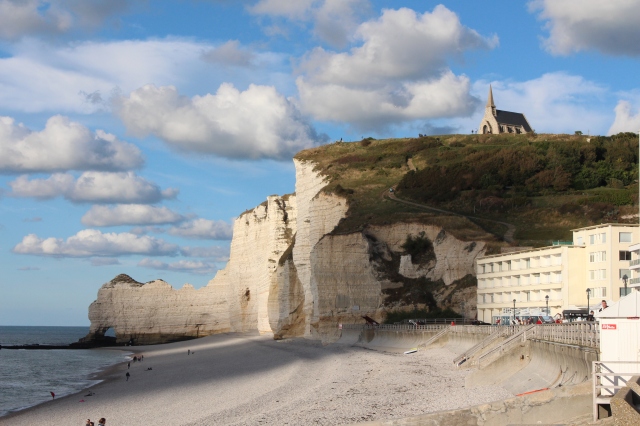 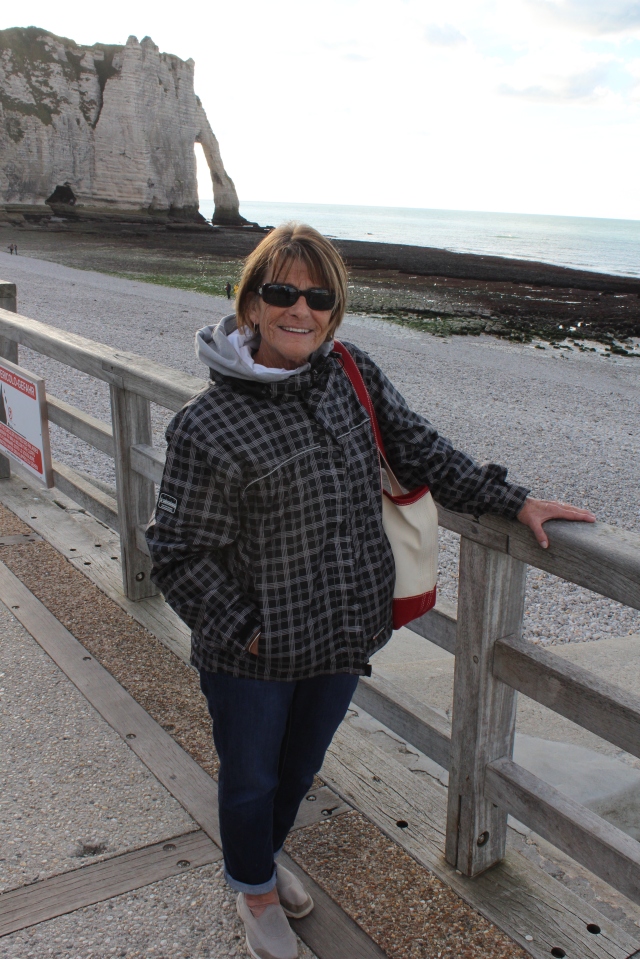 Mom on the Étretat boardwalk 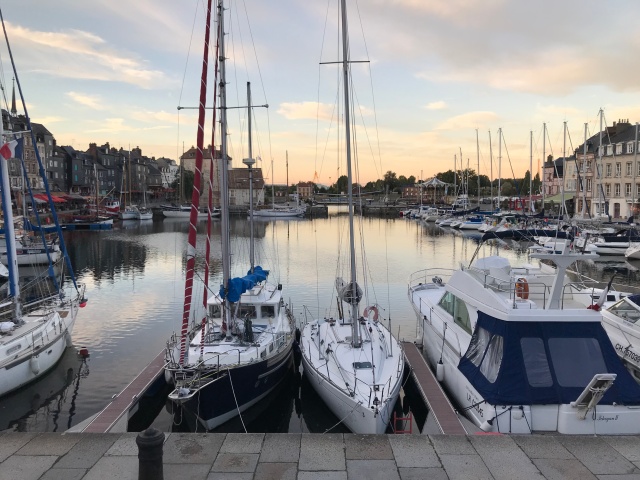 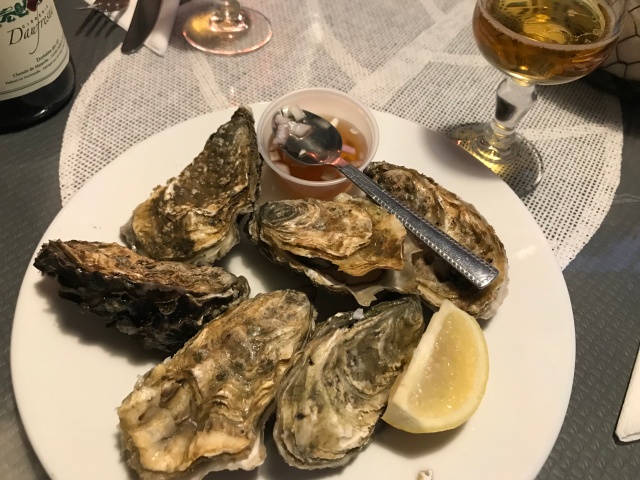 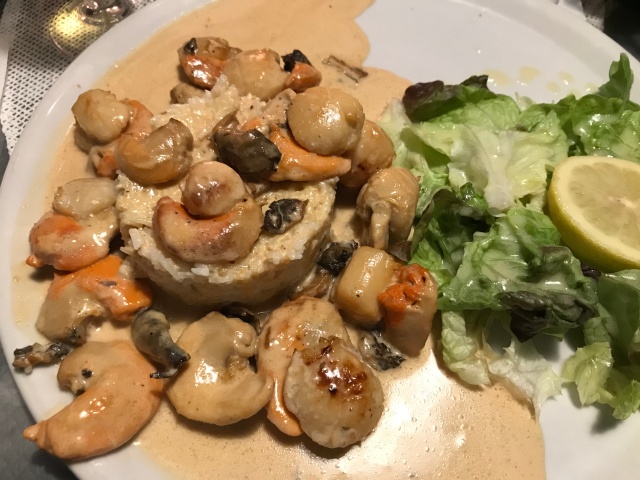 On Tuesday, we would be setting out on the “Cider Route”.  But we had to stop first at Château du Breuil, a Calvados distillery with a huge estate house and gardens.  Calvados is a brandy made from distilling apple cider.  We took the tour followed by a tasting.  Back on the road, we started the Cider Route which is a 40 km loop through the apple farming countryside of the Pays d’Auge region.  It was a very enjoyable drive which ended with a stop in Beuvron-en-Auge which has been listed as one of France’s most beautiful villages.  Back on the coast, we popped into Deauville known as a prominent seaside resort for the Parisian upper class.  From there, it was back to Honfleur along the coastal road.  We had a late bite there and Mom enjoyed a coffee in the sun.  We checked out the town a little then relaxed before dinner.  We dined again at the old port and I tried something new… little sea snails called whelks or “bulot” in France. 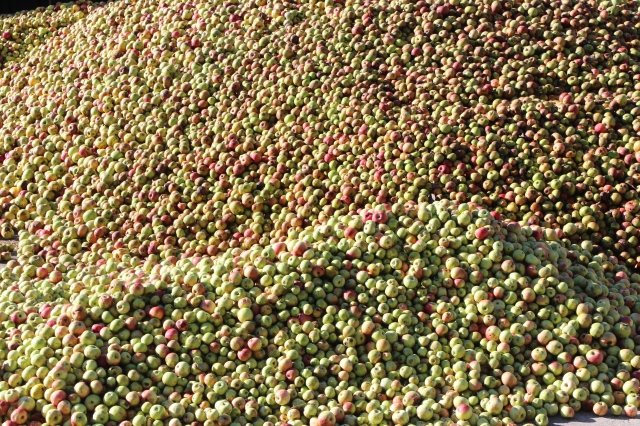 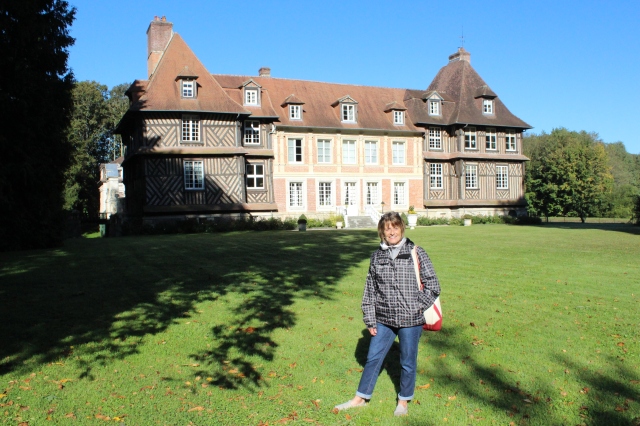 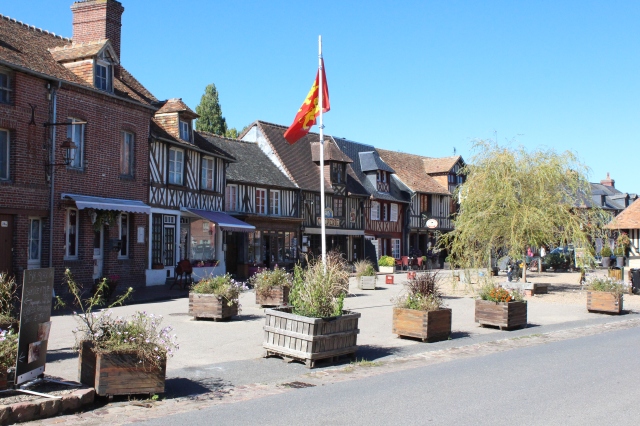 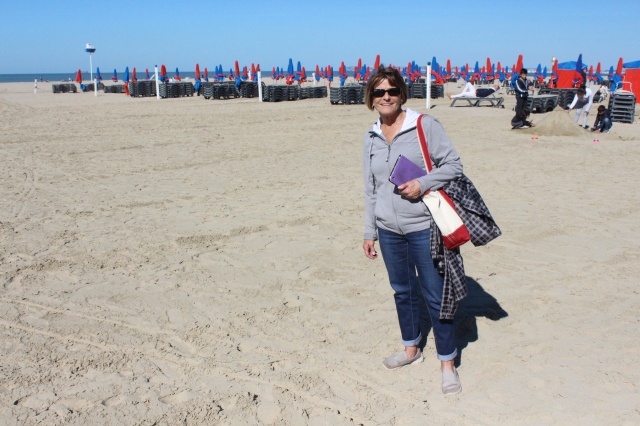 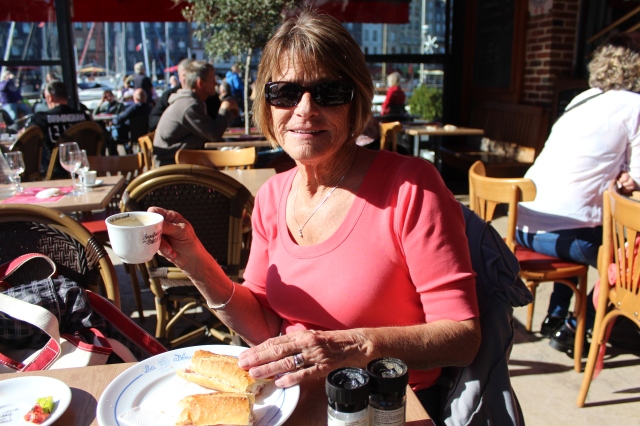 Afternoon coffee in the sun 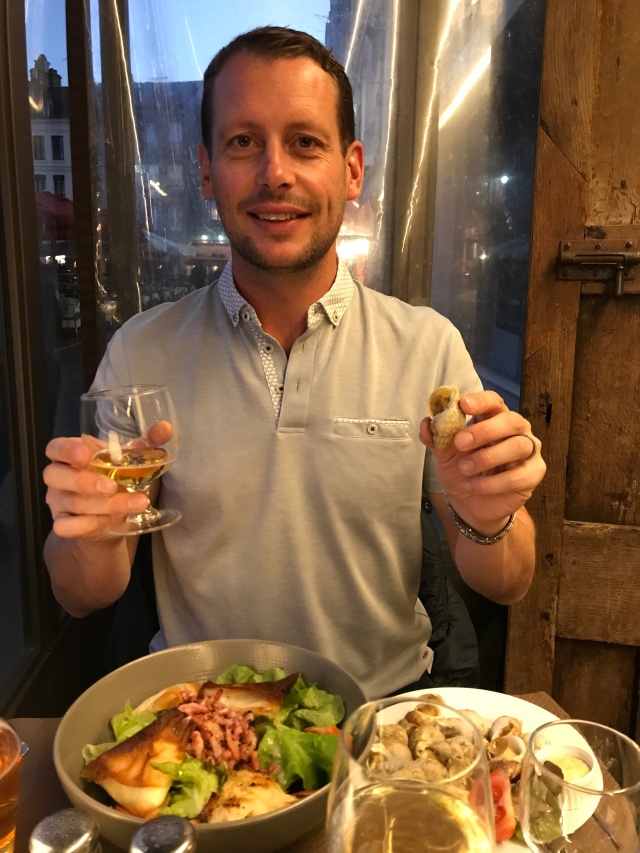 We were on the move again on Wednesday.  We packed up and left Honfleur and headed west.  Today, we would be seeing the D-day beaches.  Our first stop was Juno Beach Centre which tells the story of Canada’s capture of the beach on June 6th, 1944 and the ensuing Battle of Normandy.  We then visited the Canadian War Cemetery in nearby Bény-sur-Mer.  Our next stop was Arromanches where the Allied forces constructed a temporary harbour that saw 2.5 million men, 500,000 vehicles, and 4 million tonnes of supplies enter mainland Europe.  We visited Arromanches 360°, a circular cinema that shows footage from the 100 day Battle of Normandy.  Continuing west, we stopped for a picnic lunch on the cliff tops of Longues-sur-Mer overlooking the English Channel.  We then checked out the defensive battery built by the Nazis that housed 152mm navy guns.  Our last stop was Omaha Beach where the American troops suffered a great loss of life.  We then turned tail and headed for Bayeux where we would spend the next 2 nights.  We found the charming Hotel Particulier de Sainte Croix and walked across the square where we had dinner at Restaurant La Taverne des Ducs. 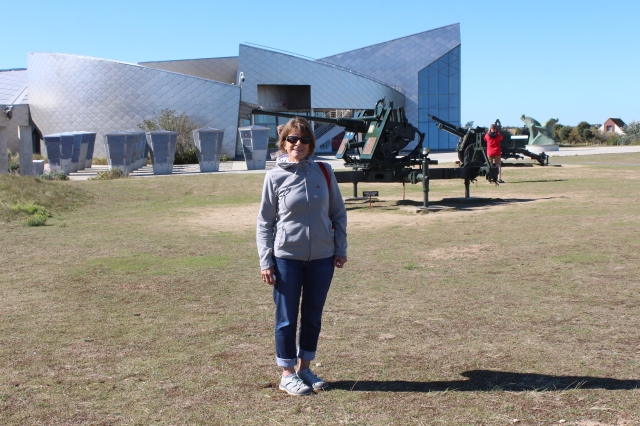 Mom at the Juno Beach Centre 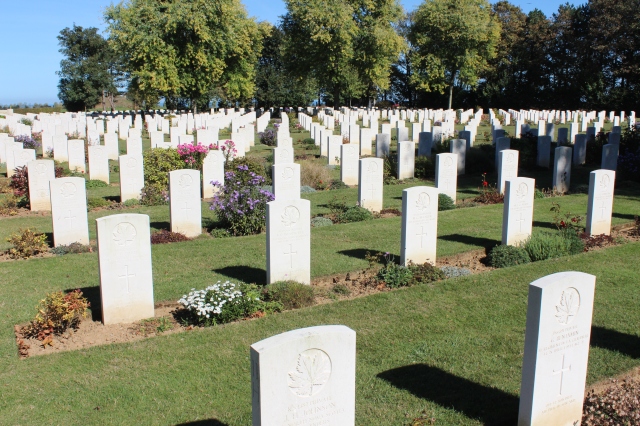 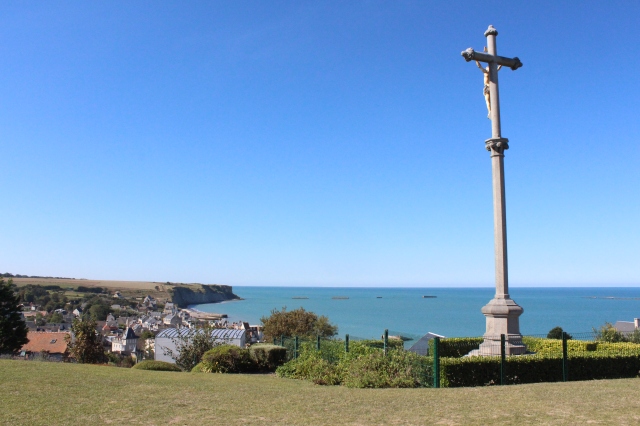 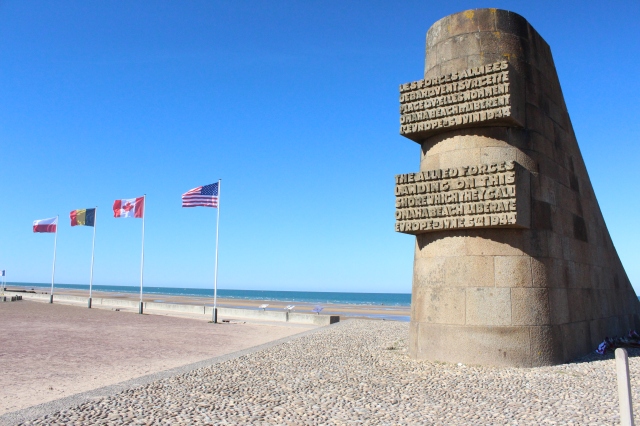 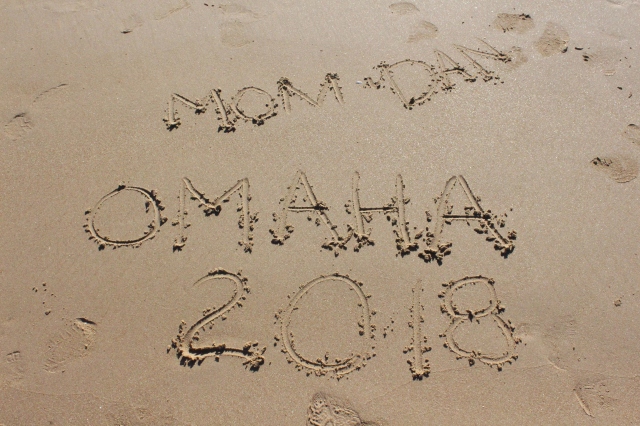 The next morning, we enjoyed an amazing breakfast that included the most delicious French toast I think I’ve ever had.  We were on the road early as we had a 2 hour drive down to Mont Saint Michel and we were hoping to get there in time to see high tide completely surround the island.  First built in 709, the island has a long history of religion and fortifications.  We parked the car and jumped on the bus that takes you across the causeway.  We entered the gate and slowly made our way up the winding streets until we reached the Abbey of Mont Saint Michel.  We had an audio guide which led us through the impressive structure.  The views from west terrace were amazing and we could see groups of people crossing the bay on foot as the tide went out.  Once out of the abbey, we found a spot to sit down and have our picnic lunch.  We then made our way out and headed back to Bayeux.  A visit to Bayeux is not complete without seeing the Bayeux Tapestry, a 70 m embroidered cloth that tells the story of William the Conqueror.  After that, we sat in the sun and enjoyed a beverage before heading back to the B&B.  We passed the Bayeux Cathedral on the way back and the light was hitting it perfectly.  For dinner, we wandered back into town and found an al fresco spot called Le Garde Manger.  I had one last batch of oysters with a foie gras salad and mom went for a French onion soup and salad combo. 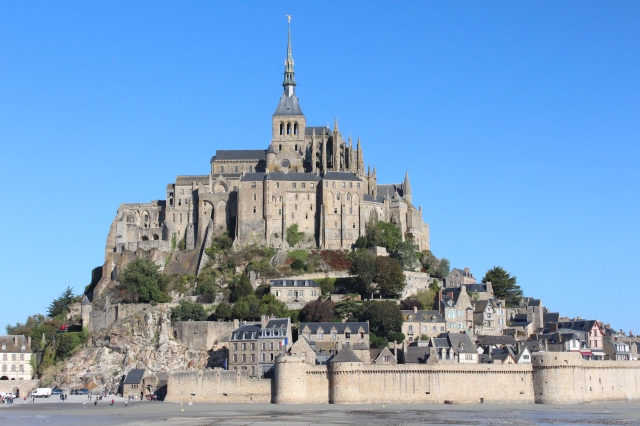 Mom and Dan in Bayeux 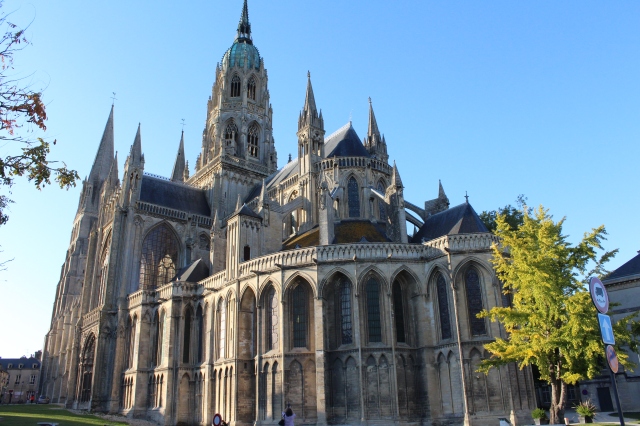 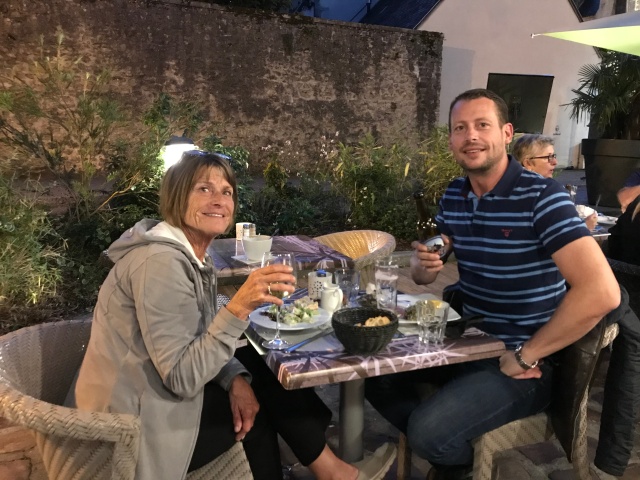 Mom and Dan at Le Garde Manger in Bayeux

The weather in Normandy was terrific, blue skies and warm.  The next morning, we would put Normandy in the rear-view mirror and head for The City of Light.