When my first cousin Jo-Anna mentioned they were planning on going to Europe on one of Tim’s business trips with the boys, we could not pass up the opportunity to meet them over the Eid al Fitr long weekend. We flew on the evening of Wednesday, June 13th, arrived in the early hours of Thursday morning, and found our rental car waiting. We had one day to tour the French countryside north of the city before meeting up with the gang in central Paris.

We hit the highway headed northwest to Chantilly. We were in search of the famous Chantilly cream and lace but found neither (they don’t make the lace there anymore and it is hard to find the cream). However, we were not disappointed. Firstly, we found a coffee shop, Couleurs Café, that was open and owned by a local lady – delicious coffee and croissants (though she only had one chocolate left and Dan ordered it first…). After our morning caffeine injection, we set out on foot towards the Château de Chantilly and viewed it from afar across the water. 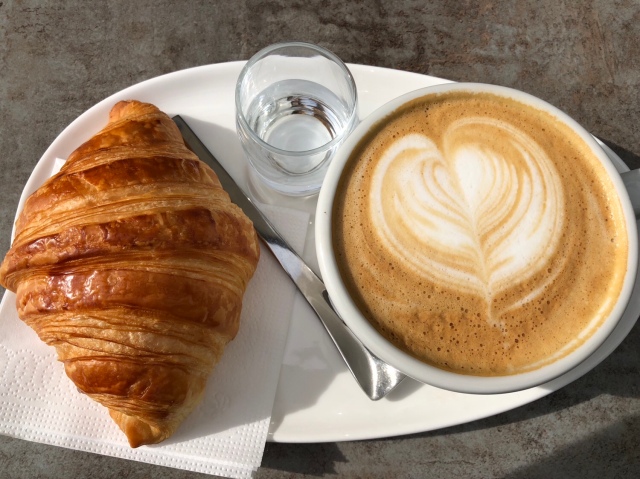 Croissant and coffee at Couleurs Café

Our next stop was the town of Senlis which had a lovely cathedral in the old centre. We parked the car, did some shopping, and eventually found a spot for lunch. Le Scaramouche happened to be right across from the cathedral and is also a Michelin restaurant. We could not resist the snails as an appie – Dan had to have the steak tartare with frites and I went for the salade de chèvre chaud (i.e. hot goat cheese salad) which was of course accompanied by some amazing French red and the most fantastic view. 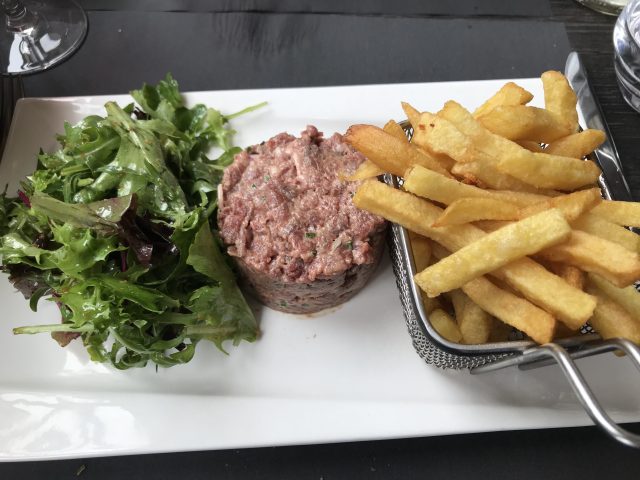 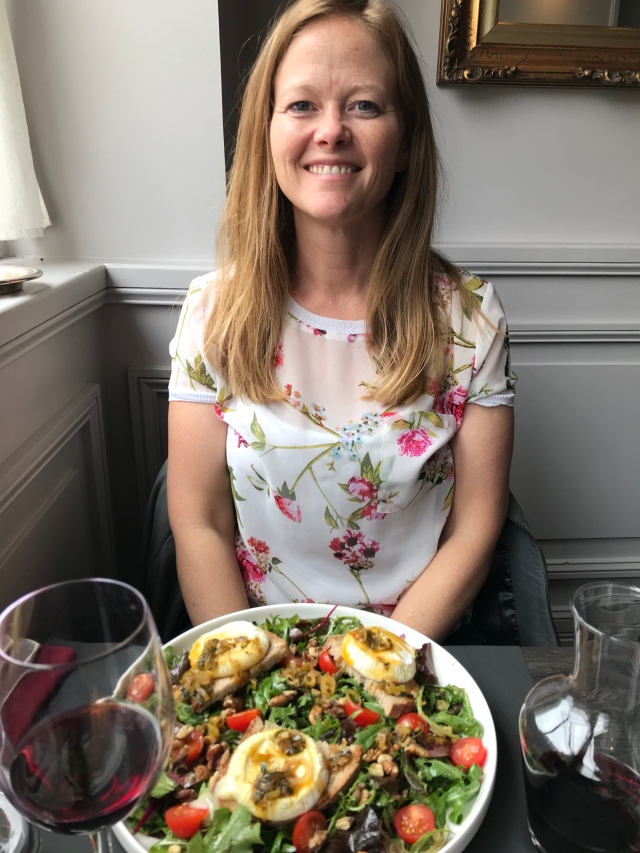 Considering we had only been in France for a few hours and we had already experienced a lot, we were getting pretty tired so we headed for our final destination – the small town of Meaux, just outside of Paris near Disneyland. We wouldn’t have heard of this town if our Cheese of the Month club at Jones the Grocer in Abu Dhabi had not featured them in their recent newsletter and named them the “King of Brie”. We tried this cheese back in April, noticed it was made near Paris and then the stars started to align.

We arrived in Meaux after taking a leisurely drive through the French countryside and received a nice welcome from our BnB hosts at Chambres chez Annie and Alain. It was getting later so we decided to have dinner in and quickly popped out to pick up a bottle of wine, cheese, saucisson, and crackers from the local Carrefour. The next morning, we had a simple, but amazing breakfast of artisan baguette from the local bakery, jams, and fresh orange juice (petit dejuner).

Our first stop of the day, was, not surprisingly, to the Carrefour to pick up some more wine and champagne. We then stopped at the local Nicholas wine shop as we believed we had some time to kill and asked about the “Bière de Meaux”. They did not carry the beer, but they directed us to the fromagerie around the corner. We popped in and were greeted by a local Frenchmen who gave us some friendly advice – not only on the cheese, but on the local mustard as well. We picked up some Moutarde de Meaux, bière, and foie gras de canard. 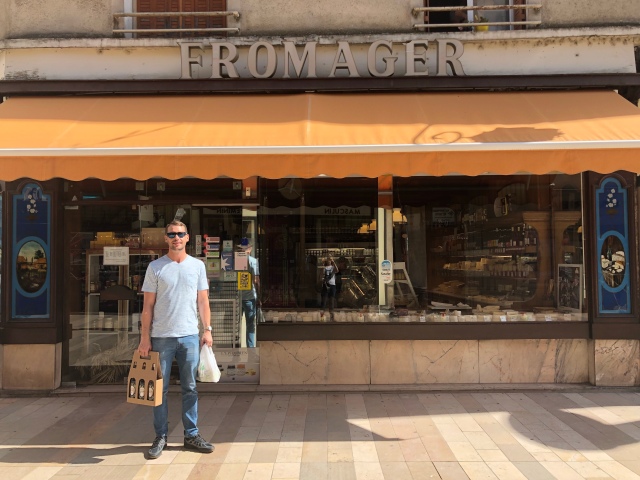 Next stop? Local cheese producers, Saint Faron. We got out of the rental car, took a pic and started to head inside (while passing a man taking out a stack of boxes which initially I thought were pizza boxes, but soon realized they were boxes of cheese wheels) for the tour we believed was beginning at 11:00. We asked about the “tour” and were kindly told we missed it and could do the self-guided version. It was pretty well done, but when we got back the line for cheese purchases was even longer than when we got there so we couldn’t even grab a wheel! 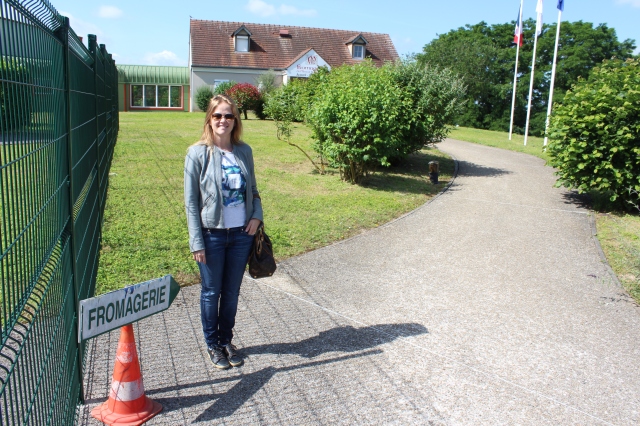 Dan somehow knew there was a World War I museum conveniently located very nearby the cheese factory … highly suspicious… I agreed to go in thinking we could breeze through it and head back to St. Faron for some cheese before they closed at 12:30. However, it had way too much information and exhibits to “breeze through”. So we enjoyed the Musée de la Grande Guerre (The Great War museum) and then decided to have a picnic lunch outside in the beautiful gardens. We dined on a couple of local Meaux beers and our leftovers from the day before. 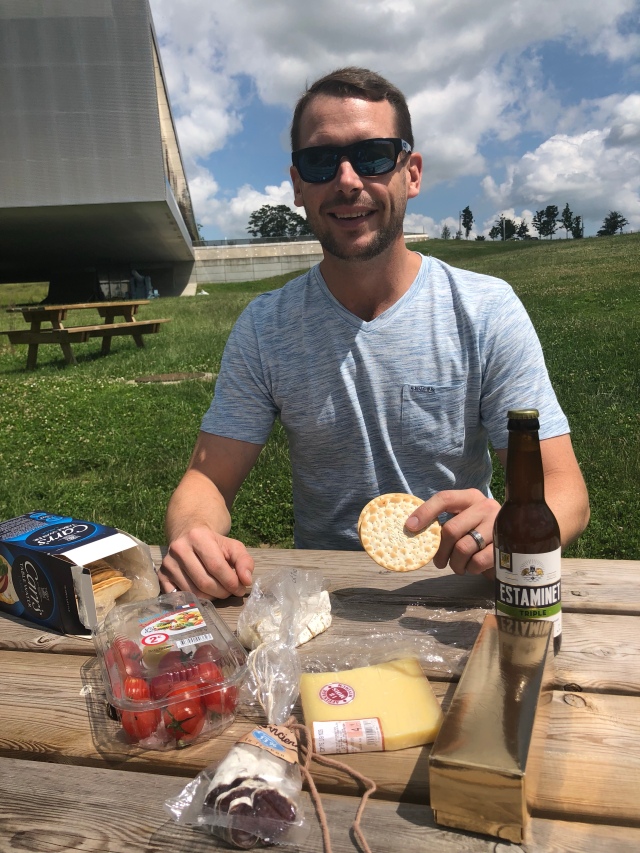 Picnic lunch at the museum

We then hit the highway to Paris to meet up with the fam’.

In September 2010, Dan and I received working visas for the United Kingdom. We sold our condo, quit our jobs and packed our bags to move to London. This blog is designed to update our friends and family back home about where we are and what we are up to, as well as to share our adventure with others.
View all posts by rrettenmier →
This entry was posted in Europe, France and tagged Bière de Meaux, Chambres chez Annie and Alain, Chantilly, Chantilly cream, Chantilly lace, Château de Chantilly, Couleurs Cafe, Eid al Fitr, King of Brie, Le Scaramouche, Meaux, Moutarde de Meaux, Musée de la Grande Guerre, Nicholas wine, Saint Faron, Salade de chèvre chaud, Senlis, Senlis Cathedral, Steak tartare. Bookmark the permalink.

1 Response to King of Brie – Meaux