Posted on November 11, 2017 by danroyerickson

Thursday, September 21st was a holiday in the UAE so I set out at 9:25 am on one of the last Air Berlin flights from Abu Dhabi to Berlin.  I arrived at 2:00 pm and caught the bus over to Air Berlin headquarters and met Bec and some of her team.  That evening, we walked to the nearby Michelin restaurant, Reinstoff, and had an amazing 5 course dinner and wine pairing. 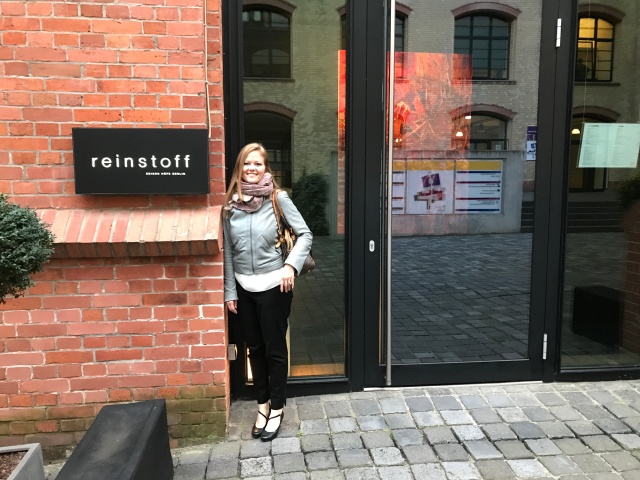 Ready for a fine meal at Reinstoff 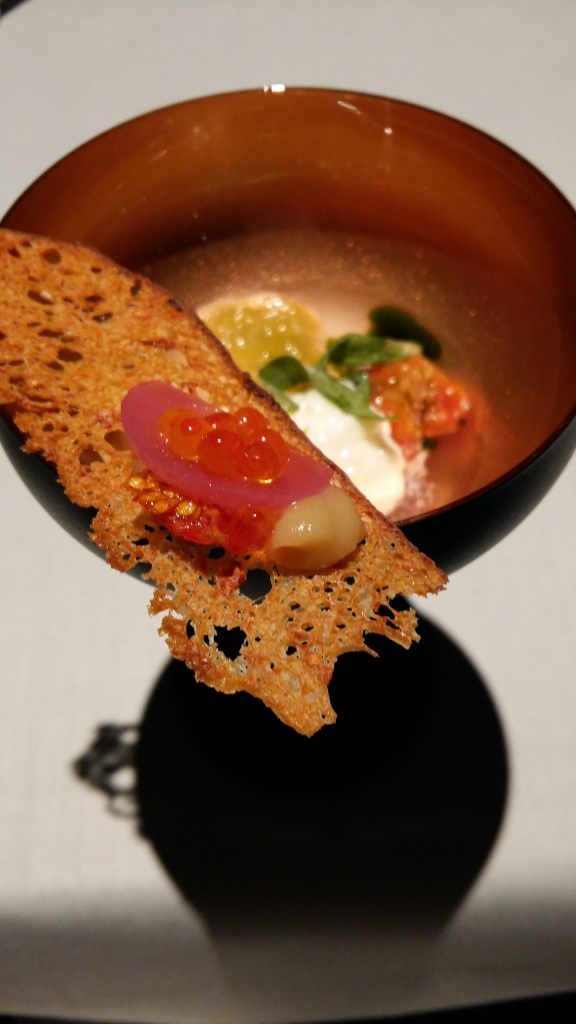 With the Berlin-Abu Dhabi flight no longer operating, we had planned for me to fly home from Düsseldorf.  So, we worked out some weekend Rhineland plans in the morning and then went for a walk along the river to Alexanderplatz.  Being Oktoberfest, we first checked out the Berlin edition of Munich’s famous Hofbräu beer hall.  It wasn’t very lively so we backtracked and took up a seat at a picnic bench in the Alexanderplatz Oktoberfest beer garden.  That evening, we had dinner at a place that we’d both walked by a million times but had never been, Kartoffelkeller (Potato Cellar), specializing in all things potato.  Those Germans love their potatoes! 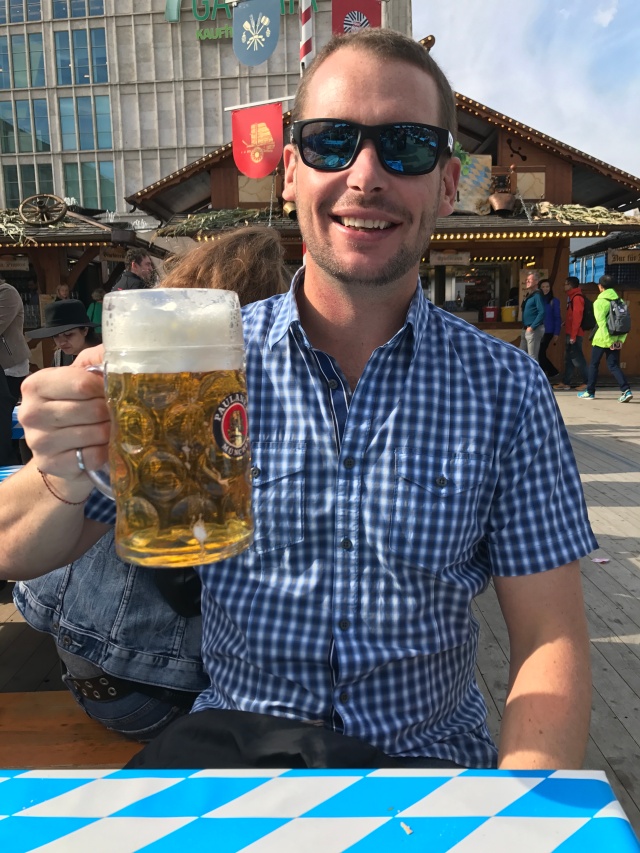 On Saturday morning, we rode the S-bahn to Hauptbahnof and caught the 06:52 ICE train to Bonn.  We then transferred to a regional train bound for the Ahr Valley, one of Germany’s 13 official wine regions.  We found our hotel in Neuenahr quite easily; it was right across the street from the train station.  We ditched the bags and headed back to the train station.  The next village up the valley, Dernau, was holding their annual wine festival.  We wandered the streets of the picturesque village surrounded by the steep south facing slopes covered in rows and rows of vines, sampling the local wine as we went.  The Ahr produces a higher proportion of Spätburgunder (Pinot noir) than any other German wine region.  We made sure we got to the main square in time for the new Wine Queen to be named. 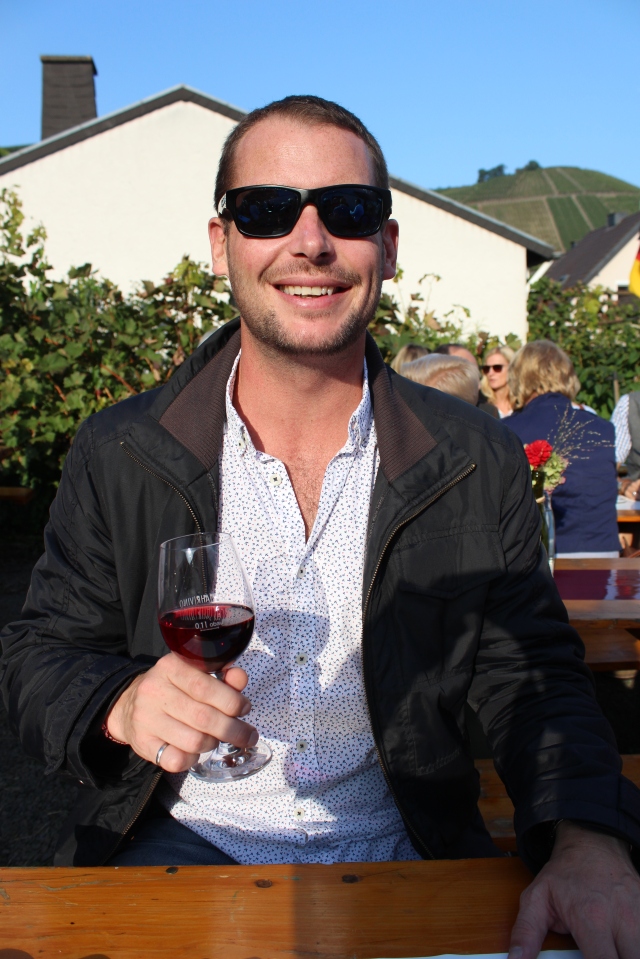 Naming of the Dernau Wine Queen

The next morning, I picked up a rental car and drove back to pick up Becca.  We headed up the Ahr Valley passing the wine villages of Dernau, Rech, Mayschoß, and Altenahr.  We passed Kreuzberg before climbing up and out of the valley on a switchback road.  We drove through the scenic Ahr Hills that form the natural border between the German states of North Rhine-Westphalia and Rhineland-Palatinate before starting back.  We stopped in Rech to stretch our legs and couldn’t resist a “wine probe” tasting at Max Schell.  We then crossed the street for a nice schnitzel lunch at Sebastian 1520.  The highway was blocked in Dernau so we had to detour out of the valley which offered some amazing views.  The detour also happened to take us by the factory making Bec’s favorite candy, Haribo.  We dropped the car off at the hotel and headed back to Rech on the train.  We walked approximately 3 km from there to Dernau on the Red Wine Trail, a 35 km hiking trail that links the villages of the valley.  The Dernau Wine Festival was still in full swing.  We missed the wine parade, but there was still plenty of wine waiting to be tasted.

Dernau nestled in the Ahr Valley 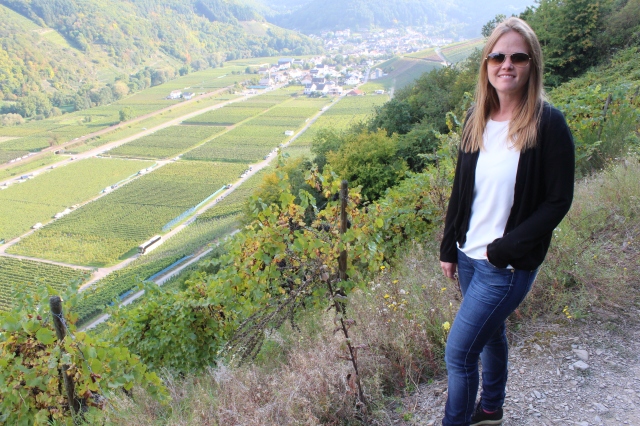 The next morning, we set out on a three city tour.  Our first stop was Bonn.  We parked near the train station and made a must stop for Bec, the Haribo Store.  We walked by the Bonn Cathedral or Bonner Münster and onto Münsterplatz which is the home of the Beethoven-Denkmal, a large bronze statue unveiled in 1845 in the city center to honor Ludwig van Beethoven’s birthplace.

Our next stop was Cologne, a half hour drive north.  We had read about an old brewery named Päffgen founded in 1883 still serving its Kölsch style beer and regional food specialties.  We ordered what many would consider Germany’s national dish, sauerbraten, and washed it down with a couple Kölsch.  From there, we headed to the old centre to find Germany’s most visited landmark, the Cologne Cathedral.  This huge church touts an impressive list of facts and figures, but it is only until you see it that you get a sense for its true size.  After exploring the church, we walked along the Rhine River, sat in the park, and strolled through old town. 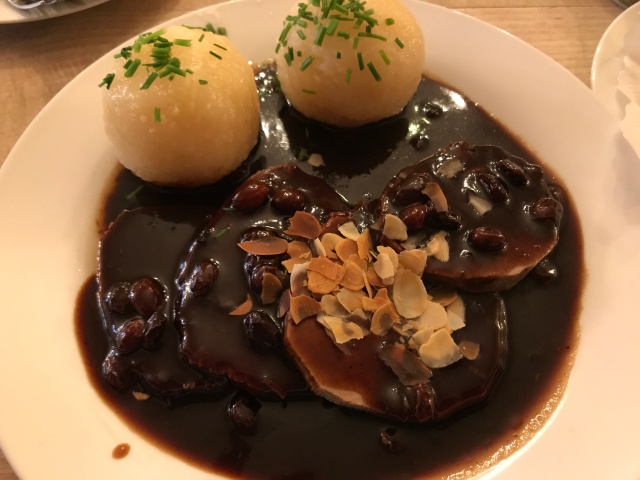 Back in the car, we continued north another 30 min to Düsseldorf.  We found some parking and wandered down the wide, upscale, shopping street of Königsallee.  We cut over to the Rhine and walked north.  We stopped at one of the many riverside restaurants and tried the Düsseldorf style of beer, altbier.  That was the end of our tour, so we jumped back in the car and headed for the airport where I would be flying back to AUH and Bec was taking her last AB flight to Berlin.  I said goodbye to Bec at the departure gate and wished her luck on her last few days of living in Germany. 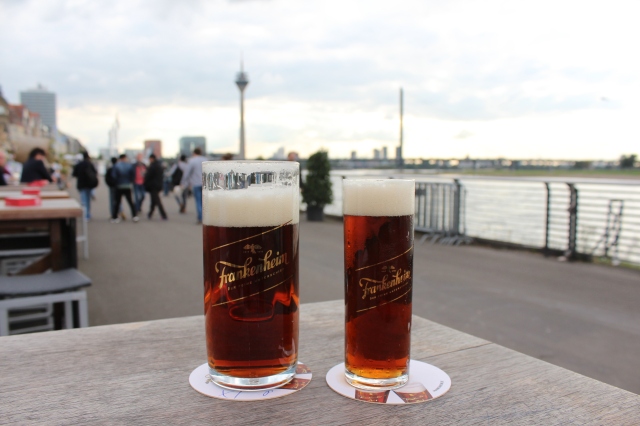 Couple of Altbier to finish off our tour

3 Responses to Last Trip to Germany