Posted on July 9, 2017 by danroyerickson

Bec arrived in Abu Dhabi at 6:05 am on Thursday, May 25th.  I was there to greet her at the airport before she dropped me off at work.  I know what you’re thinking…nice one Dan, but she had a full day of personal and social engagements.  That night, we met Nadia and Rene at Pool Bar for a catch-up bevy before heading off to the airport.  Destination…Beijing!

We arrived the next morning at 9:30 am and caught a taxi to our hotel.  The Hulu Hotel is a courtyard hotel, located in a hutong in the Dong Cheng District, and was a tranquil oasis from the nearby hustle and bustle of this megacity.  Our hotel recommended we try the nearby restaurant for lunch, serving food from the Yunnan region, while we waited for our room.  We ordered a few dishes, the most adventurous being the fried meal worms and chilies.  That afternoon, we walked over to the famous shopping street of Wangfujing and strolled along stopping for a green tea ice cream cone.  Next was Snack Street, an interesting collection of street food, but we held off our hunger.  We followed a recommended walking tour in our guide book that took us through Changpuhe Park, Duanku Hutong, and the Mahakala Temple.  Our tour ended at the gates of the Forbidden City, but those gates were closed for the day.  For dinner, we had done our homework so we knew we were headed to Siji Minfu, a long-standing restaurant specializing in Peking Duck.  We had to wait outside for about 45 minutes but it was worth the wait and the duck was delicious.  A rite of passage in Beijing. 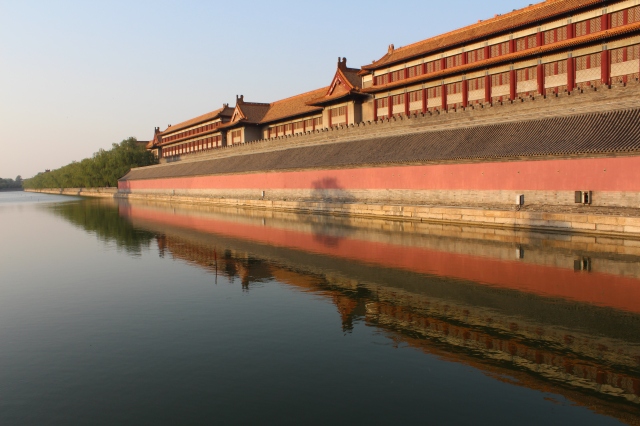 Western side of Forbidden City at sunset

The next morning, we walked south from the hotel and found a bakery, claiming to be the best in Beijing.  We had an interesting pork floss bun for breakfast and continued on to Tiananmen Square.  It was great to stroll around this huge square so tied to China’s history.  We climbed up Zhengyang Gate on the south side of the square and enjoyed the views.  From there, it was back across the square to the Forbidden City.  The largest palace complex on Earth was completed in 1420 and served as the home of Chinese emperors and the political seat of power for almost 500 years.  The grounds were huge and the palaces numerous, but we had stashed away some pastel de nata tarts from the bakery to keep us going.  We made it back to our neighborhood and stopped for a bowl of soup at the Noodle Shack.  We found some cool Beijing beers to enjoy on the hotel terrace, Bec’s favorite, Panda Eyes Red Honey Ale, mine, Gao Baby Jasmine. 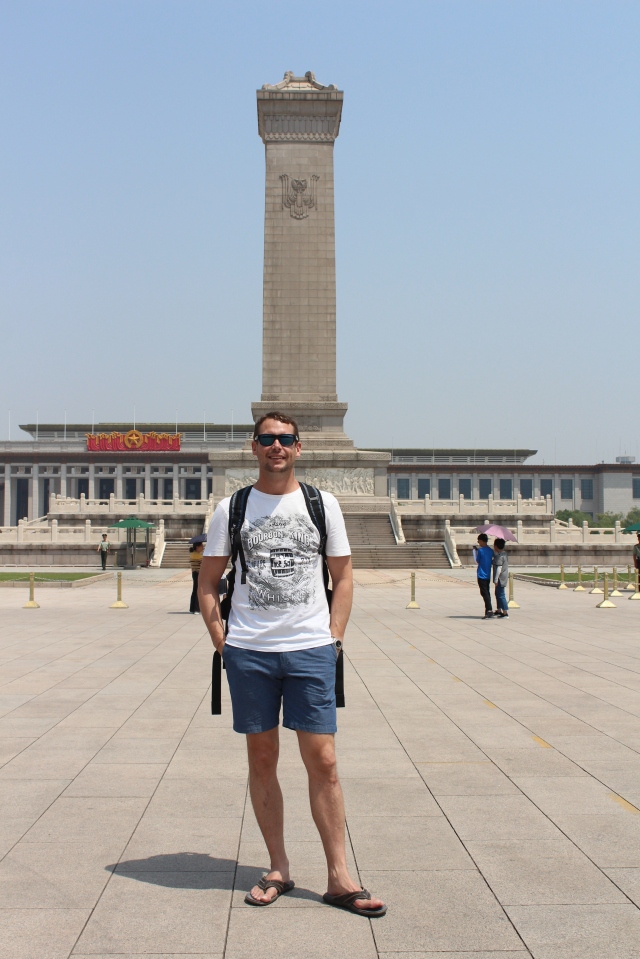 Dan and the Monument of People’s Heroes 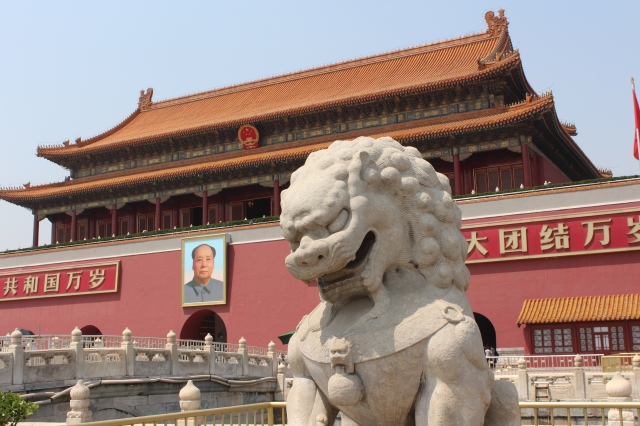 The Palace of Heavenly Purity

That night, we set out for Ghost Street, the traditional route on which corpses were taken out of the city and, therefore, no one wanted to live.  Hence, it is filled with blocks and blocks of popular restaurants.  Again, we fought our hunger, although, this time, I’m not quite sure why!!  We jumped on the metro to the CBD and walked up the party street of Sanlitun.  First stop was Beer Mania, where Bec’s all time Belgian favorite, Tripel Karmeliet, was on tap.  From there, Bec led us to the Nali Patio, a cluster of former school buildings which has been turned into one of Sanlitun’s best spots for bars and dining.  We opted for the Spanish tapas at Migas before hitting the rooftop bar.  We tried to hike it home before giving in and negotiating with one of Beijing’s notoriously ruthless rickshaw drivers. 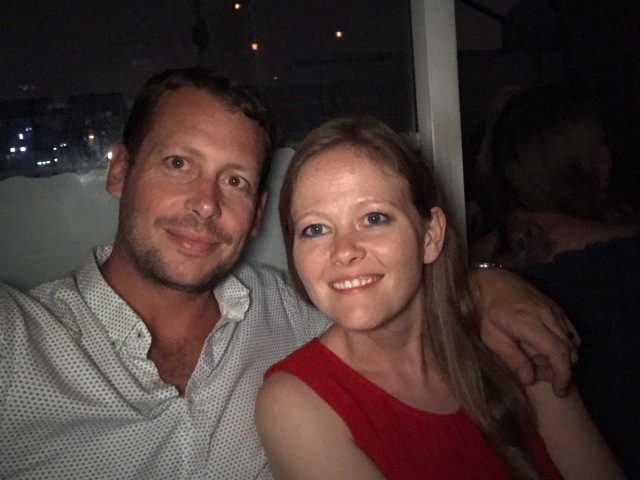 On Sunday, we hopped on the metro to the Houhai lake district.  We had an amazing lunch at Kong Yiji that consisted of stuffed lotus root, mung beans, drunken chicken, shrimp, and beef soup.  We continued our lakeside wander through the busy tourist street of Yandai Byway towards the Bell and Drum Towers, the northern extent of the old Beijing walled city.  We climbed up the Drum Tower and stayed for the ceremonial drumming.  Back on the lakes, we continued south to the more popular Bei Hai Lake and onto Qiongdao Island before catching the metro back to Hulu to enjoy some cocktail hour beers. We soon discovered that a branch of our favorite dim sum chain restaurant wasn’t too far from the hotel so we made our way to Din Tai Fung that evening.  After a fill of shumai, we stopped at a tea shop in hopes of replenishing our dwindling stocks of good Chinese tea back home…success.

Bec on the confluence of Houhai

Monday might have been our clear winner.  We were picked up from our hotel after breakfast and started north for the Great Wall of China.  We arrived at Mutianyu and our driver helped us get the necessary tickets.  We caught the gondola up to the top and headed west along the wall.  The number of people was quite overwhelming, but the further away we got, the more and more peaceful it became.  We gained a fair bit of elevation to where the “park” area stopped, jumped the gate, and pressed on.  Most of the touristic wall sites have been renovated, but beyond this point the wall became more real.  We reached a point at which no upgrades had been made and we walked what the vast majority of the wall is today…a pile of ruins overgrown with vegetation.  Turning back, we climbed down and passed the point of our entry and continued east.  Yes, the tourist numbers were horrendous, but the scenery of it all was amazing.  I wouldn’t mind doing some serious trekking along the wall if I ever get the chance.  We had the option of taking a slide down the mountain, but we decided on the chair lift.  We demolished a Subway sub before meeting our driver and hightailing it back to Beijing.

Dan in his element

Bec chillin’ on the Wall

We made it back by 4:00 pm and followed our regular evening routine of spicy Sichuan peanuts with a couple of Panda and Baby Jasmine beers.  I may or may not have been sneaking in a quick resting of the eyes most afternoons.  That night, we honed in on a Beijing favorite, hotpot.  We walked over to the popular Haidilao Hot Pot and were told we would have to wait an hour for a table, but it was well worth it.  I don’t think I’ve ever had a non-exercise related sweat quite like that.  They call it Hot Pot for a reason and, looking back, perhaps we shouldn’t have ordered the spicy version.  The most interesting thing we threw in the pot was pork intestine and the coolest thing was having our noodles hand pulled at the table.  The weirdest thing was spotting a large group of middle aged, bare-chested men at a table on the way out.

We were a bit awestruck by the shear size of the city constantly underestimating what we thought would be considered “walking distance” on our map.  Very, very cool city though!

1 Response to Beijing & The Great Wall