Rebecca and I had been planning to visit Hong Kong for quite some time, but had to keep postponing the trip and it was tentatively set for the Eid al Fitr holiday.  I was given the entire week off, but Rebecca had to work the Sunday and Monday.  So we decided I would go sooner and try to get a little hiking in before Bec arrived.  I had a little time to check out the hiking possibilities in HK and zeroed in on MacLehose Trail, a 100 km trail named after the longest serving governor of HK, Sir Murray MacLehose.

I arrived in Hong Kong in the early morning of Saturday, July 2nd.  I caught 2 trains and 2 buses to arrive at the trailhead in the remote (by HK standards anyway) Sai Kung East Country Park around 11:00am.  It was a little more remote than I had bargained on and found myself with only 1.5 L of water before setting out.  Note: The weather in HK in July is hot and humid (around 32C, but humidity up at 80-90%).  I started out on the relatively flat 10.6 km road that makes up the majority of Stage 1.  The route skirts the southside of High Island Reservoir, which was an engineering feat when it was completed in the 70’s.  There were many tourist buses and taxis buzzing by so I figured there must be some form of liquids available at the end of the line.  The views of the reservoir and outer HK islands were amazing and it was nice to meet some fellow trekkers.  After 4 h on the trail, I was utterly crushed to learn there wasn’t a single drop of water available at the fairly well visited tourist site of the East Dam.  It was either catch a bus back into town to get water or continue on the footpath to Long Ke beach and take my chances there, I went for it.  The trail crested a ridge and then dropped down to a beautiful tropical white sand beach.  It’s said that HK’s finest beaches are found in Sai Kung.  I arrived in the tent village and begged for some water from the local campers and figured I’d have to hike back out.  Then I found him, a young fella selling water and beer to the weekend beach goers…my oasis!  I purchased 6 L of water from him and set to guzzling as much as possible.  I found a nice spot to pitch my tent, but it was immediately clear that the small herd of feral cattle could rival, in my experience, even the most persistent troop of marauding macaques.  They were trampling tents and raiding the coolers of carefree beach goers at will.  So I got my camp set up and watched the waves roll in from afar too worried about the vermin cattle to leave my camp unattended.  By the aid of my trusty G-Shock Rangeman, I could see the temperature only dropped to 29C overnight and I rolled in and out of consciousness as I lay sweating profusely on top of my Therm-a-Rest mattress.  Don’t think I’m hating this experience so far, it’s all part of the adventure!

Walking along one of the dams on High Island Reservoir 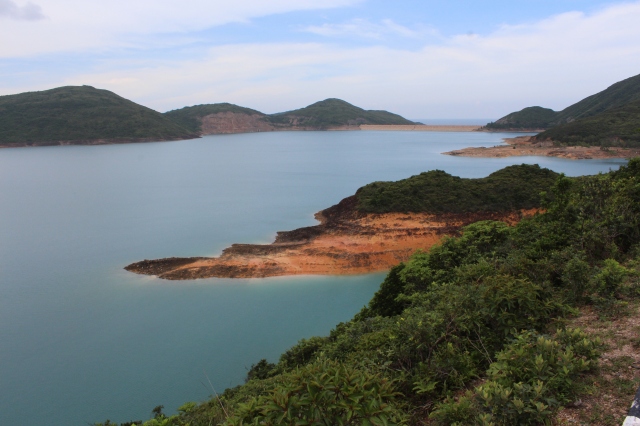 Reservoir with East Dam in background 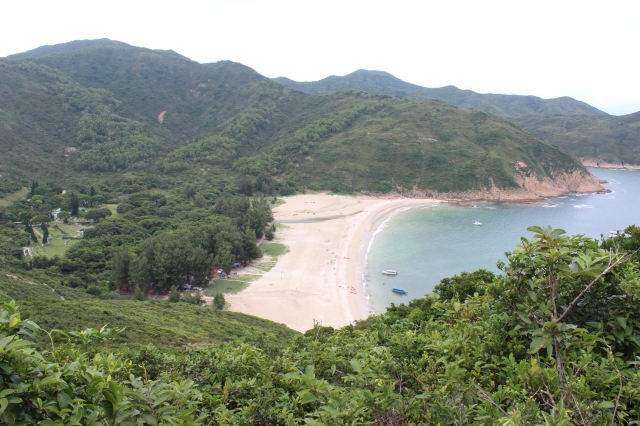 Up early the next morning, I broke camp and hit the trail by 6:00am.  Stage 2, a 13.5 km trek said to be the most picturesque of the entire trail…this is what we came for, right?  I had 2 L of water left from the night before but I was assured that the village of Sai Wan had proper restaurants, etc.  The trail climbed steadily to 314m, but it seemed much more than that…my water was spent.  Shortly after reaching the Sai Wan Shan ridge, I nearly stepped on a bright green Bamboo Snake which I later learned is venomous, delivers a highly painful bite, is rarely fatal, and is the number one biter in HK due to its tendency to rely on camouflage vs. flight defence.  Good thing this little rascal was smack dab in the centre of the trail and not clinging to some nearby bushes.  To me, this section of trail lived up to its reputation of pure untouched beauty.  I dropped down into Sai Wan and stopped at the first restaurant I came across.  I purchased another 6 L of water and had my first HK meal, a nice egg, hotdog, noodle soup.  The trail continued along the beach and I found the bridge across a small river had been washed out.  I walked up the river until I found a natural ford and bush-wacked my way back to the trail.  By now, the sun was beating down as I made my way over the ridge to Ham Tin beach.  From Ham Tin, the trail turned inland and climbed steadily towards Pak Tam Au.  The rain clouds closed in on my last 1 km and I couldn’t avoid the tropical downpour.  I arrived at the roadway and found some shelter.  I took a few minutes to evaluate my options…continue on the trail and hike until Rebecca arrived as planned or get the heck off the famous MacLehose Trail.  Considering the extreme chaffing of my thighs, the wrinkling of my feet beyond all recognition, having no dry clothes, and the thought of another sleepless night in my tent I chose the latter.  I caught the bus heading to HK with some of the local weekend warriors I had met along the trail and put my HK hiking experience behind me. 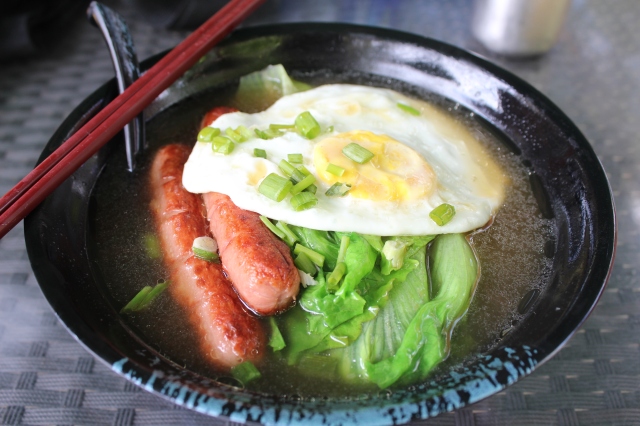 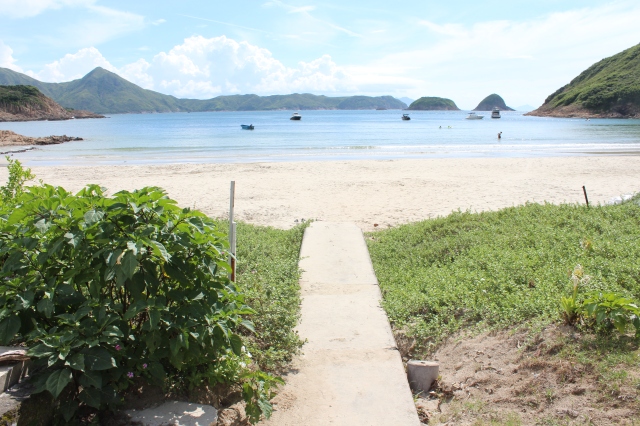 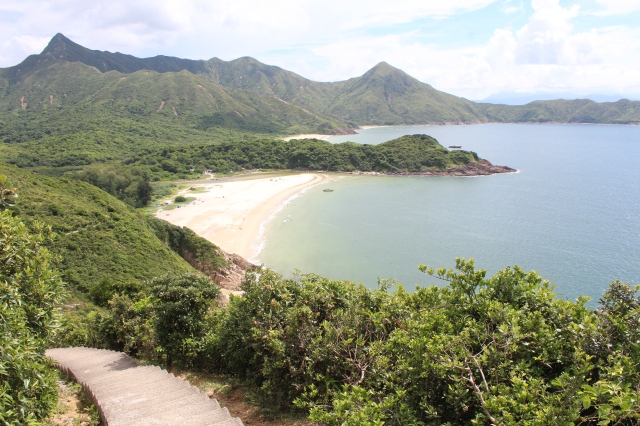 I consulted my DK Eyewitness Hong Kong Travel book and decided to find the Chungking Mansions in Kowloon (Bec and I had agreed that I would wait for her before checking out HK Island).  I found the Mansions and was shown to a room for roughly $30 US per night.  In hindsight, I probably should have sprung for something a little more upscale considering the numerous insects and creepy crawlies that would be sharing my accommodation for the next 2 nights.  I would later read online about Chungking’s notorious reputation.

On Monday morning, I wondered amongst the tai chi enthusiasts and through the aviary in Kowloon Park before heading down to the Star Ferry terminal.  I crossed Victoria Harbor and found the ferry to Cheung Chau Island known for its traditional fishing harbor, tiny streets, and temples.  It didn’t take me long to explore the village and see the sights.  So, I hopped on another ferry to Lantau, HK’s largest island.  I caught a bus to the other side of the island to visit the pretty village of Tai O.  It’s situated on a tidal estuary and it’s one of the last places in HK to see the traditional stilt housing of southern Chinese fishing villages.  From there, I caught another bus Po Lin Monastery.  Its home to the Tian Tian Buddha (aka Big Buddha), a 34 m bronze statue sitting atop a flight of 260 steps.  One highlight was watching the monks in their worship in the main monastery.  From there, I started my journey back to Kowloon.  My dear wife would be arriving the next morning. 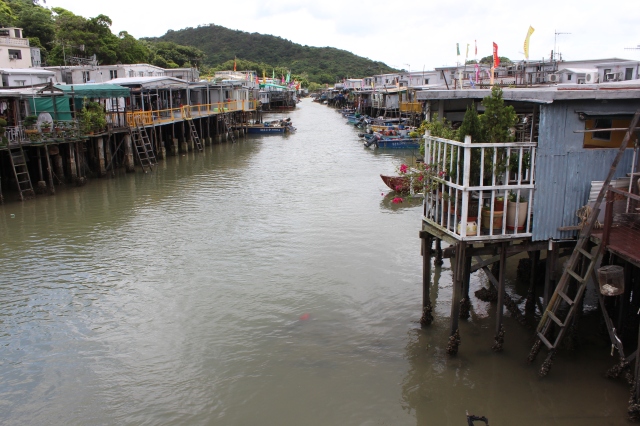 3 Responses to Trekking in Sai Kung