Springtime in AD with Scott and Jenelle

Scott and Jenelle arrived in Abu Dhabi in the early afternoon of Thursday, April 14th.  Bec and I were both at work so they kindly hopped in a taxi and made their way to our place.  This was no trouble for a seasoned visitor to Abu Dhabi like Scott.  That evening, the 4 of us had a mojito at Havana Club and an awesome dinner at Hakkasan both located in the Emirates Palace Hotel.

Our guests had a good night’s sleep after their long journey and late night.  Around noon, we loaded up the Jeep and headed out to a popular 4×4 area named Al Khazna.  We met some other Oryx 4×4 members at the gas station and headed to the deflation point.  There we made some introductions, deflated, and discussed the upcoming drive.  We were soon cruising over the dunes with Scott up front and the ladies in the back.  Not too far into the drive, Bec wasn’t feeling too well in the back seat and swapped places with Scott.  However, soon after, Scott too fell victim to the back seat’s low visibility of the horizon and general bumpiness.  We tried putting Scott in with the marshal, Jen, but it did not help.  The group stopped for a 20 minute break and the 4 of us decided to pull out of the drive.  The group graciously changed course to get us to a dirt road and we made our exit.  Scott was feeling much better once we hit the blacktop so we high-tailed it for home. 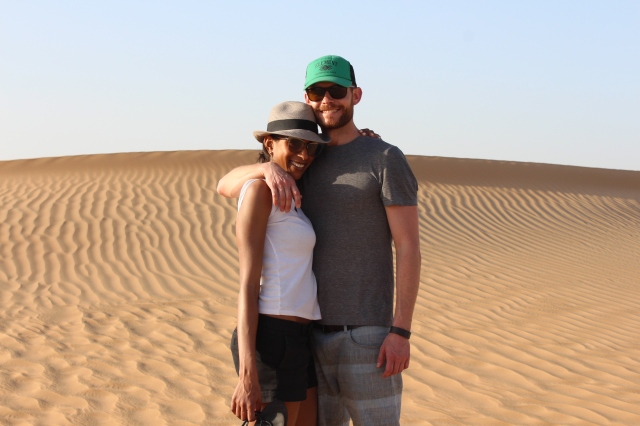 Scott and Jenelle in the Al Khazna dunes

On Saturday, I was able to line up the company boat including a captain.  We had some Arabic mezze at the marina then met our captain and loaded up.  We headed southwest passing the new Presidential Palace and Massnoua Island before going ashore on Halat al Bahrani Island.  Scott and I got in the water while the ladies soaked up some sun.  There were lots of other boaters scattered about on the shores of the sandy tidal islands.  After an hour or so, we picked up the anchor and set course for a 4 hr circumnavigation of Abu Dhabi Island.  It was interesting to see the island from the water especially the huge estates of the Al Bateen area.  We had to face the open water of the Arabian Gulf coming round the port near the end of the day.  The seas were up and the waves tossed our boat around a little giving the ladies a good shower of salt water, but we made it back to the marina in one piece.

Our craft for Saturday afternoon

Becca reported into work on Sunday but I took the day off.  Scott, Jenelle, and I joined the 11:00am tour of the Sheikh Zayed Grand Mosque.  We had a bite of lunch at Tod English’s Olives at the Ritz Carlton before heading over to Yas Mall.  We wandered around for a bit finding a few things for the kids before heading over to the Abu Dhabi Golf Club.  We chilled on the patio and waited for Rebecca and our friend, Spence, to arrive.  The 3 guys had a 6:30pm shotgun start on the nine floodlit holes.  After the round, Scott and I headed home to find the ladies gone but soon returning from a cocktail at Ray’s Bar. 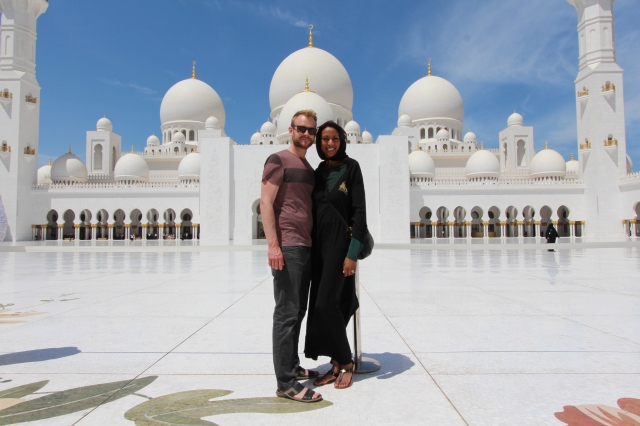 Scott and Jenelle packed up and drove to Dubai on Monday morning.  They stayed in the Dubai Marina at a top notch beach resort and explored the marina for the day.  On Tuesday, they relaxed by the pool before heading to Dubai Mall for the afternoon.  That evening, they had a 6:00pm appointment to go up the world’s tallest building, the Burj Khalifa.  Once they arrived, they were willingly up-sold to visit the newly opened 148th floor experience.

They left Dubai the next afternoon and arrived back at our place around 5:30pm.  That night, Bec and I couldn’t resist going to a Louis Jadot Burgundy wine tasting at the Hyatt Capital Gate hotel so we dragged our visitors out for a night of wine education…some sampling might of happened as well!

Bec had to work again on Thursday, so Scott, Jenelle, and I kept busy with a visit to Heritage Village.  We even talked Jenelle into riding a camel!  After that, we stopped at Central Souk for an Arabic lunch and did a little souvenir shopping.  We went down for a dip in the pool once we were back at the apartment.  I thought our guests might like a little down time before Bec got home, but I was wrong…Scott and Jenelle went for a good hour’s walk down the Corniche.  That night, we had a dinner at home of scallops with curried noodles.

Jenelle on Tufan, a prized dromedary

Friday is brunch day in Abu Dhabi and we had invited some friends to join us at the Olea restaurant in the St. Regis Saadiyat Island Resort.  This was Scott’s second AD brunch after the epic run we had at the Westin at the end of 2014.  The St. Regis brunch ran from 1:00-4:00 pm and had an amazing selection of food and drinks.  It was definitely our last al fresco afternoon of the season as Scott and Jenelle seemed to magically grab the last bit of our spring weather.  We went for a short walk on the boardwalk after brunch before settling at the seaside restaurant to watch the sun drop to the horizon. 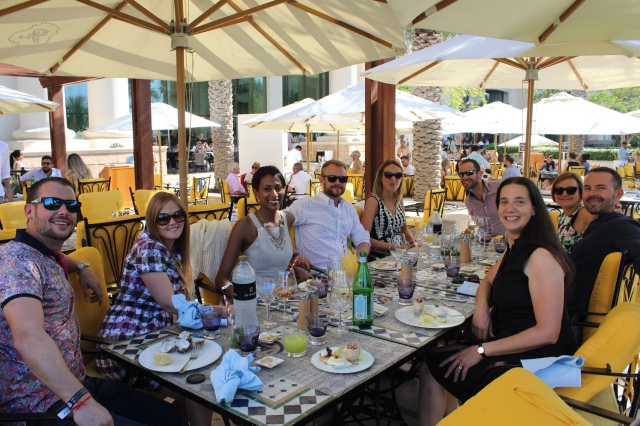 Sun goes down on a beautiful couple

Saturday was Scott and Jenelle’s last day in Abu Dhabi so there were a few errands to run.  We popped by Yas Mall, had lunch at Bentley Bistro at The Galleria, wandered through Jones the Grocer, and picked up a few things for dinner.  That night we prepared Indonesia’s national dish, nasi goreng, which is a fried rice dish.

We said goodbye to Scott and Jenelle on Sunday morning and they started their journey home.  They really did catch the last of the spring weather here as the mercury shot up as soon as they left and we are now sitting comfortably in the low 40’s.  It really meant a lot to have my brother and sister-in-law travel so far to visit us in Abu Dhabi.

This entry was posted in The Middle East, United Arab Emirates. Bookmark the permalink.

2 Responses to Springtime in AD with Scott and Jenelle