On Tuesday, February 16th we checked out of our Sula hotel and headed into the centre of Nashik.  Our first stop was the city’s most important shrine, the Kalaram Temple, which was built in 1788 and dedicated to Lord Rama.  Just outside the western entrance of the temple is Sita Gumpha (or Sita Cave).  The cave contains idols of Rama, Sita, and Lakshmana and can only be accessed via a tiny narrow staircase.  From there, we visited the Ram Kund, a bathing ghat in the centre of Nashik’s old quarter.  It was an amazing place with so much going on.  Hundreds of pilgrims arrive daily to bathe, pray, and immerse the ashes of departed friends and family as the waters are said to provide moksha (liberation of the soul). 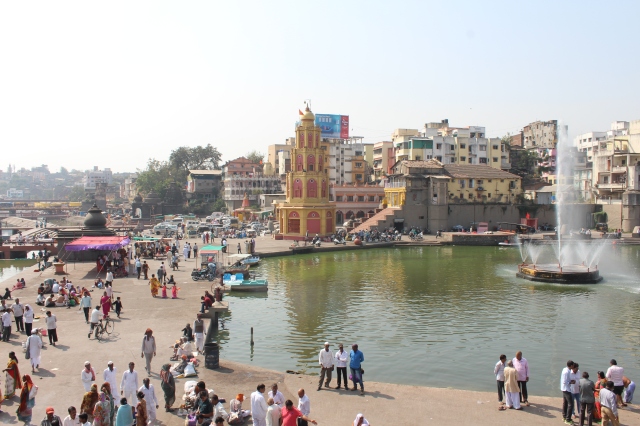 From there, we hit the open road on our way to Jalgaon and arrived in the late afternoon.  There wasn’t much to do in Jalgaon, but it was strategically located for a good jumping off point the next day.

We were on the road in the morning and it was about an hour drive to reach the Ajanta Caves.  I’ll let Wikipedia give you a quick rundown:

“…30 rock-cut Buddhist cave monuments which date from the 2nd century BCE to about 480 or 650 CE.  The caves include paintings and sculptures described by the government Archaeological Survey of India as “the finest surviving examples of Indian art, particularly painting”, which are masterpieces of Buddhist religious art, with figures of the Buddha and depictions of the Jataka tales. The caves were built in two phases starting around the 2nd century BCE, with the second group of caves built around 400–650 according to older accounts, or all in a brief period of 460 to 480 according to the recent proposals of Walter M. Spink. The site is a protected monument in the care of the Archaeological Survey of India, and since 1983, the Ajanta Caves have been a UNESCO World Heritage Site.”

The caves were eventually abandoned and slipped out of common knowledge until the entrance of Cave 10 was discovered by a British officer on a tiger hunt in 1819.  We decided to hire a local guide and we were glad that we did.  As mentioned above, the paintings depict intricate scenes of the Jataka tales and our guide was able to tell us about the stories and the symbolism in the paintings.  It is simply astounding how much work would have been involved to make these caves. 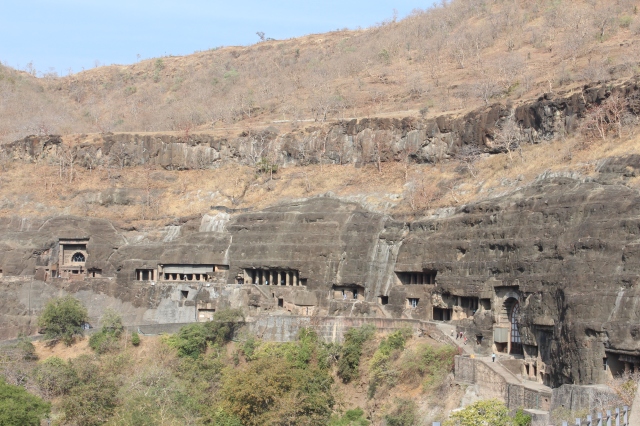 Painting of The Buddha

After the caves, we had Suresh take a detour to the village of Anwa so we could stop at the 12th century Shiva temple.  I think this temple is a little off of the well beaten tourist track and the locals seemed a little surprised to see us.

That night, we checked into the Green Olive Hotel in Aurangabad and had an amazing Thali dinner (definitely the spiciest of the trip).

On Thursday, we set out to another UNESCO site, the Ellora Caves, passing the famous Daulatabad Fort on the way.  Excavation began on these caves as the Ajanta Caves were declining so it was nice to see Ajanta first.  I’ll let Wikipedia summarize again for you:

“Ellora is an UNESCO World Heritage Site and forms one of major tourist attraction in Marathwada region of Maharashtra.  Ellora represents the epitome of Indian rock-cut architecture.  The 34 “caves” are actually structures excavated out of the vertical face of the Charanandri hills.  Hindu, Buddhist and Jain rock-cut temples and viharas and mathas were built between the 5th century and 10th century.  The 17 Hindu, 12 Buddhist and 5 Jain caves, built in proximity, demonstrate the religious harmony prevalent during this period of Indian history.  It is a protected monument under the Archaeological Survey of India.”

We tried to hire a guide when we arrived but they said all had been hired already.  We figured we’d be OK as this site is more known for its sculpture as opposed to intricate paintings.  I led the tour using Auntie Susan’s invaluable Lonely Planet guide book as a reference.  The pinnacle of a visit to Ellora is Cave 16 or Kailash Temple.  The word cave is a bit of a misnomer because this monolithic temple is an amazing, multi-storied wonder.

We spent a little more time there than we initially expected and the hot and dry Maharashtra weather was beginning to take its toll.  We rallied and finished our tour after seeing the Jain caves.  We had initially planned to see the Daulatabad Fort that afternoon, but we decided to postpone that visit until the next day. 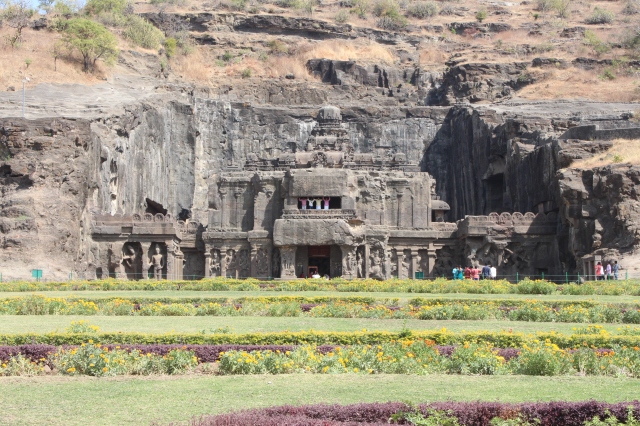 With our hydration and energy levels renewed, we headed back to Daulatabad Fort on Friday morning to beat the daytime heat.  It was an interesting walk up the 200m hill of which 50m of its slopes were cut away to leave a defensive vertical drop.  The most interesting part about the ascent is the narrow bridge and bat-filled, tunneled staircase that one must cross/climb to reach the top.  After admiring the stunning views and having a wee snack, we began our climb down. 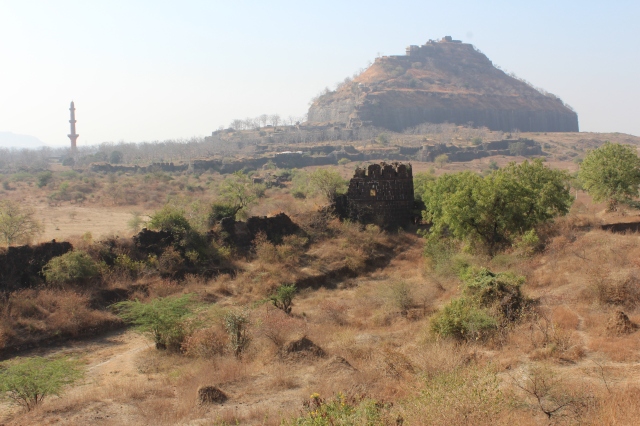 At the gates of Daulatabad 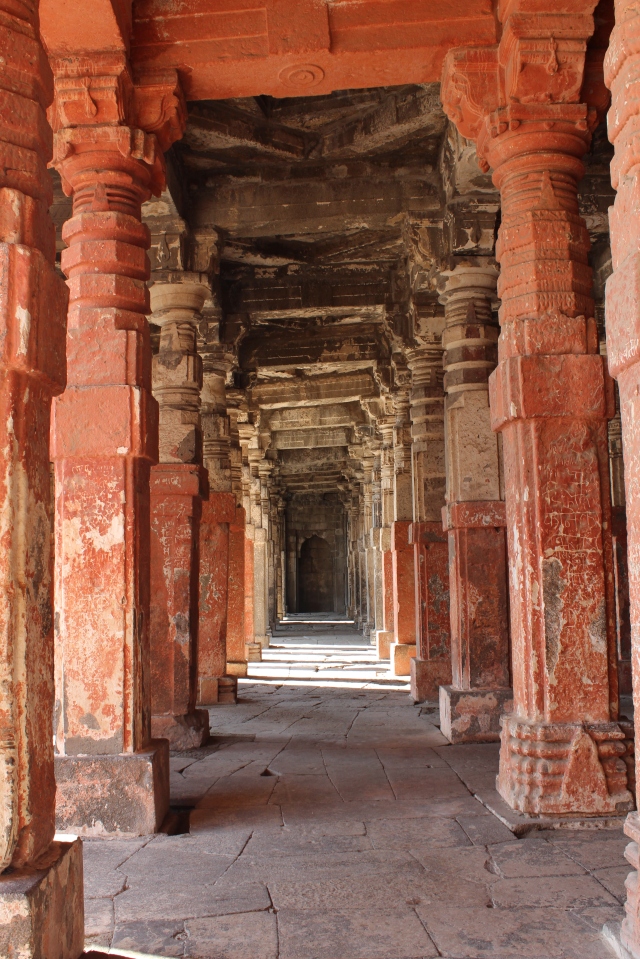 Kala Kot (or the Death Gate) 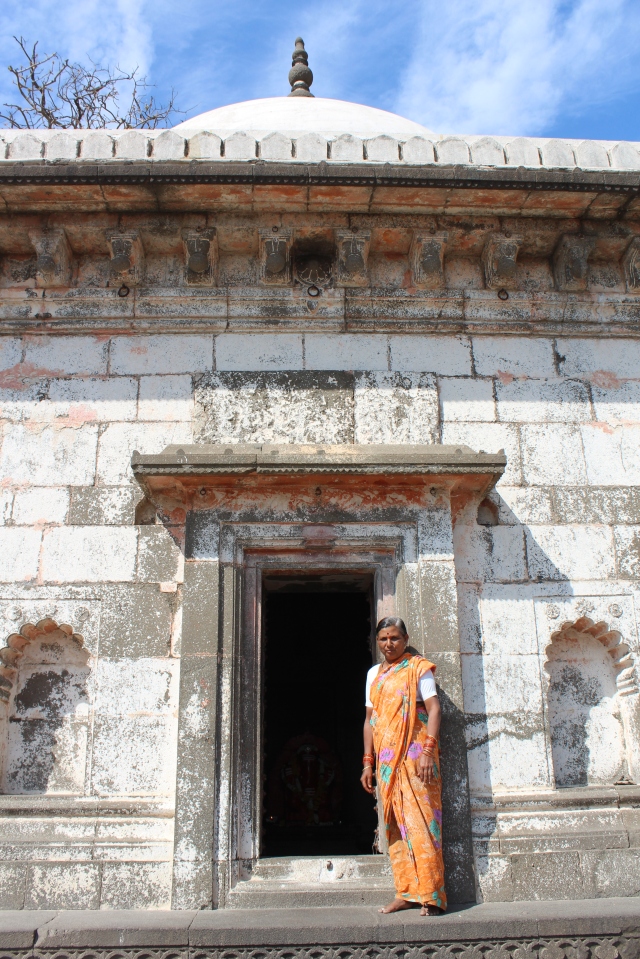 We made our way back into town and stopped at the Grishneshwar Temple which is one of the 12 Jyotirlinga shrines in India.  It was pretty neat and interestingly, Uncle Steve and I had to take off our shirts to get in.  Next, we stopped at That Bhaat restaurant for another Thali meal.  Thali is a meal made up of a selection of dishes to offer all the 6 different flavours of sweet, salt, bitter, sour, astringent,  and spicy on one single plate. Afterwards, we visited the Bibi ka Maqbara, or Mini Taj as it’s also known.  This tomb was built by Azam Shah to commemorate his mother in 1678.  From there, the girls opted for a little retail therapy and we found the the Fabindia shop in Prozone Mall.  Even I found a nice short kurta.

Thali meal at That Bhaat 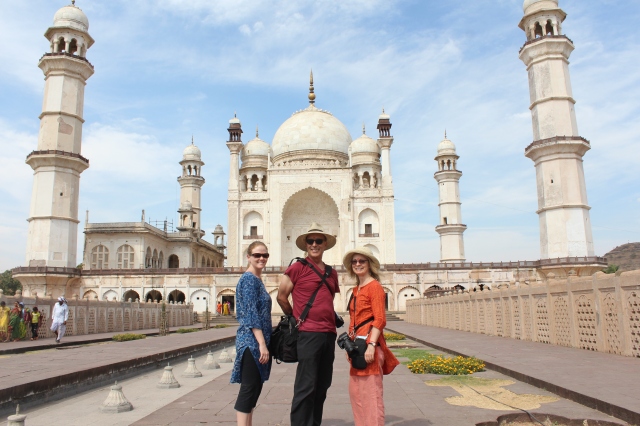 Bec and I packed our bags and had one last cheers with Uncle Steve and Auntie Susan before Suresh took us to the airport.  We flew to Mumbai that night, stayed near the airport, and were back in Abu Dhabi at noon the next day.  Uncle Steve and Auntie Susan would be continuing on to Jhansi, Varanasi, Udaipur, and Mumbai before swinging through Abu Dhabi on their homeward journey.