On Sunday, September 8th 2012 I flew to Chicago for work. It was my first time to Chicago and I really enjoyed the city. Michigan Avenue shopping, deep-dish pizza and local beer. After 3 nights I flew to New York. On Friday my cousin, JoAnna, and my mom joined me there. That evening we visited the 9/11 memorial. The site includes 2 memorials pools, a survivor tree, and a great view of the new towers they are building.

The Rebuilding of the World Trade Center

On Saturday the ladies went down to Brooklyn bridge and did some shopping at Macy’s. I met up with them for an Italian dinner and then we walked down 5th Avenue over to Times Square. On our way back to the hotel we stopped in for a Mojito at Havana Club. On Sunday morning JoAnna flew back to Rochester and my mom and I hit the streets sightseeing. We walked to the Chrysler building and then took the subway to Central Park. We walked around the park for a few hours and enjoyed a NY hot dog overlooking the lake. We walked from the park to Rockefeller centre where we enjoyed a Brooklyn beer and an afternoon bite. Then we decided to go to the “Top of the Rock” for a view of the city. 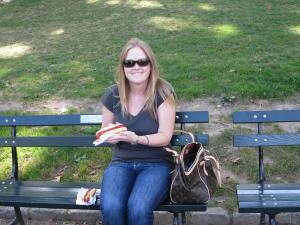 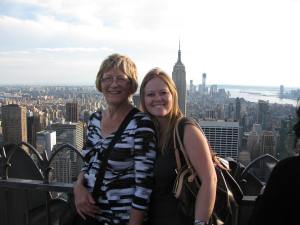 “Top of the Rock” View

During the week mom toured the sights on her own including St. Paul’s Cathedral and took a cruise around the statue of Liberty. On Monday night we went to the rooftop bar where my mom had her first cosmopolitan. Tuesday night we walked to Times Square and went to the famous Shake Shack for a delicious burger, fries, and shake.

On Wednesday night we  joined my colleagues to watch the broadway play Evita starring Ricky Martin. We had dinner with everyone after the show and then walked back to the hotel. Since it was our last night we decided to go up the Empire State building for a view of the city at night.

On Thursday morning I said a sad goodbye to my mom and she returned to Calgary. The next evening I flew back to Abu Dhabi but I didn’t see Dan for about a week because he was out on the rig for work. I just wanted to say thanks to my mom and cousin for meeting me in NYC. It was great to see you both!

In September 2010, Dan and I received working visas for the United Kingdom. We sold our condo, quit our jobs and packed our bags to move to London. This blog is designed to update our friends and family back home about where we are and what we are up to, as well as to share our adventure with others.
View all posts by rrettenmier →
This entry was posted in Canada. Bookmark the permalink.