Posted on October 25, 2011 by danroyerickson

A couple of months ago, we were fortunate enough to be invited to a wedding.  My friend and co-worker, Ilia, asked if Rebecca and I would like to attend his niece’s wedding.  We had already met so many of Ilia’s family (he has 3 brothers and 5 sisters!), so we thought it would be fun.  As Rebecca is not in Albania right now, I had to go solo.

Ilia and his niece, Zana

In Albania, wedding celebrations often last 4-7 days, in this case it was Sunday to Sunday.  The family and friends of the bride celebrated every evening at their house with food, drink, and dancing.  I was asked to come by for a visit on Wednesday and stayed for a few hours, but I’m told the dancing can carry on until the early hours of the morning.  I also got a crash course in traditional dancing where a large circle is formed and, depending on the music, you take certain repetitious steps to the right with everyone in unison.  Some steps were harder than others, but I think I caught on fairly well.  I was told that the groom was doing the same at his home with his family. 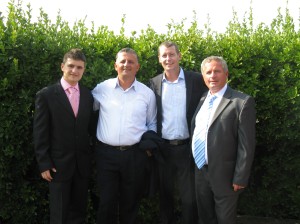 Alvaro, Ilia, me, and Baci

I also went back to the bride’s family home on Friday for more celebration.  This time I stayed until 1am and was made to drink a lot of raki.  The family and friends who were there were very nice and welcoming to me and some of the youngsters who spoke English were keen to practice their skills.  When leaving for the night I asked what time the wedding would start and was told, to my surprise, 10am.

An interesting thing about Albanian weddings versus what we do at home is that the bride and her family celebrate on Saturday.  A small number of mostly male relatives of the groom and the groom arrive later in the day.  They stay to eat, drink and dance for a couple of hours before leaving.  Then on Sunday it’s the groom’s turn to party and a small number of the bride’s family “visit” the groom’s wedding with the bride, but leave the bride with her new husband.  Another interesting fact is that there is no ceremony performed or speeches made.

On Saturday morning, I arrived at the same house where everyone was busy getting ready for the big day.  I drove Ilia’s brother, Milo, and his family out to the nearby village of Cerkovine.  The wedding was to be held at a large and open-air restaurant with long tables set up.  We quickly went inside and sat down at the tables.  There was a grand entrance for the bride; a parade through the restaurant, applause, and fireworks outside.  Through the day, there were 4 courses served, a salad and meat dish (qofte, roast, and shish kebab), then a pan fried fish called koce, a slow roasted lamb dish, and finally the sweets.  Of course, there was plenty of beer, raki, and wine to wash it all down with.  Throughout all of the courses, there was very loud music and traditional dancing.  There were other events that were similar like cutting the cake and opening champagne.  And others that were not so similar like leading the line of dancers followed by the bride while waving the money you are about to give her in the air or lifting the bride and groom up on chairs above everyone’s heads.  After the groom and his family left, the wedding was coming to an end.  It was about 5:30 pm.  We drove back to Vlore and I was early to bed.

It was a great experience that I will never forget.

This entry was posted in Albania. Bookmark the permalink.