The Mom’s in Italy

On Monday, October 3rd Bev and I boarded the ferry to Brindisi Italy. Upon arrival that evening we took a taxi south to the small town of Lecce based on a family friends recommendation. The next morning we hit the streets and walked around town viewing the beautiful Baroque style architecture. We walked to the Piazza Duomo, Piazza Sant’ Oronzo, the Roman amphitheater and the church of Santa Croce. Just before lunch we found Mama Elvira’s wine bar where we sampled some local wines and food from the Puglia region. For lunch, we dined at Alle 2 Corti, known for it’s traditional food where we tried the turcinieddhi(baby goats heart, lungs and liver) and racciachette(pasta with tomatoes). That afternoon the town died down during siesta so we relaxed at the B&B before heading out later that evening to scope out the shopping and somewhere to eat. 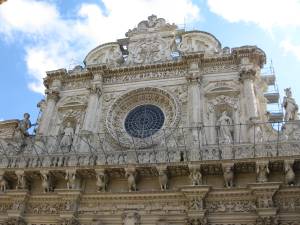 The next day we decided to head outside of Lecce to the coastal town of Otranto. We first visited the Norman Duomo, which houses the bones of 800 Christians that refused to renounce their religion when the Turks attacked in 1480. We had lunch by the seaside of caprese salad, swordfish, and mixed shellfish before driving down the coast and finally back to Lecce.

The next morning we took the 11:50 train to Rome to meet up with Dan and his mom Judy. They arrived mid morning and walked to the Pantheon, Trevi Fountain, Piazza Navona and Campo de Fiore. We met them at the Hotel Elite on Thursday afternoon. After quickly getting settled we walked to the Spanish steps where we had dinner. Then we walked to Trevi Fountain where we had gelato for dessert.

On Friday morning, we walked from our hotel to the Pantheon, through Piazza Navona, and finally to Vatican City. We walked to the top of the cupola of St. Peter’s Basilica. Bev was not happy about those 321 narrow steps but she made it! We enjoyed the views of Rome and then went inside the basilica where we all gazed in awe. We escaped the rain for lunch and then marched on to the Vatican museum. Our favourites were Michelangelo’s Sistine chapel and Raphael’s works. That evening we dined at our hotel and had a quick stroll again to Trevi Fountain(a 1 min walk from our hotel). 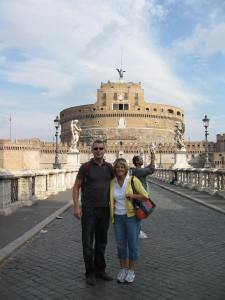 The next morning we met some friends from Albania, Titi and his wife, who are living and working in Rome. They took us to the church of the dead then up to Gianicolo for some nice views of the city. Then we had lunch at her restaurant before having to hop on our Imperial Rome bus tour. Our first stop was to visit the Church of St. Peter’s in Chains and from there we walked to the famous Colosseum. Afterwards we drove by Circus Maximus and Aventino Hill. We drove through Piazza Venezia to Piazza Del Campidoglio to catch some views of the Roman Forum. That evening we enjoyed another lovely meal(Dan had rabbit, Bev piglet, and Judy and I had pasta). After dinner, Bev and I had one last gelato at Trevi Fountain. On Sunday, October 9th we all flew back to Albania after a wonderful visit to Italy. We will have some great memories of the time spent with our Mom’s in Rome! 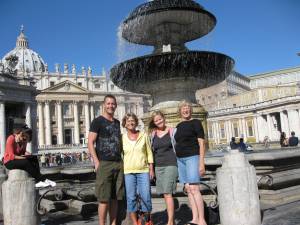 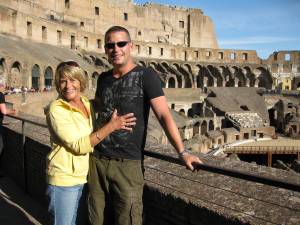 In September 2010, Dan and I received working visas for the United Kingdom. We sold our condo, quit our jobs and packed our bags to move to London. This blog is designed to update our friends and family back home about where we are and what we are up to, as well as to share our adventure with others.
View all posts by rrettenmier →
This entry was posted in Italy. Bookmark the permalink.